NettyRoyal
4 Comments on Prince Harry: The adventures of a royal cat (1)

Let’s face it! I have found my own Meghan, who is actually called Netty. But I really don’t understand why I am not allowed in her house. I sneak in from time to time anyway, either through the bedroom-window or the backdoor if I get a chance. She has quite a narrow kitchen, a small bedroom with a nice looking bed and a living room with lots of books. I really don’t know if she has read them all already! Hopefully she doesn’t think I am going to ruin them.

Netty tries to tell me I am not allowed inside because her doctor has told her that it is not good for her health at the moment. I think she should find a doctor who thinks I am doing her good. But hopefully in a month or two she will keep me if I still want her and they don’t find my old boss. I like her better anyway. I think she doesn’t know that I have overheard her conversation with her nice neighbour, who has two house cats and keeps feeding me with delicious stuff, that when she can have me, I first have to go to the doctor. Remember I am a male cat, and I am spraying whenever I want. So apparently the doctor needs to do something about it and also check my health. I have been living outdoors for some months by then anyway.

But in the meantime I keep myself busy. The weather mostly is lovely at the moment, hardly any rain, although the people complain it is far too hot. I am however always happy when Netty or her neighbour are outside, as they give me lots of attention, especially Netty. As long as it is outside she cuddles me and I love nowadays to sit next to her on the bench in the garden, even when the wood is terrible to sit on. I sometimes even put two feet on her leg, but don’t dare sitting on her lap yet. Netty just doesn’t like when I try to bite … even when I am such a patient cat.

At least she puts water outside for me now and her parents even brought a lovely basket with a pillow to sleep in. But I still prefer to sleep somewhere in her garden or in the small courtyard behind it, or in someone else’s garden if necessary. Luckily when Netty cuddles me she also makes sure all the dirt goes out of my hair. Makes it so much easier to clean myself a bit. I do also love chasing things that fly like butterflies and bees, and I do not allow other cats in MY garden, unless it is that poor cat that also hangs around here and looks horrible or the terribly old cat from upstairs, who is said to be something like 24 years old. Can you believe it?

By the way I still have no idea why she calls me Harry. Do I look like a Prince or so? Her neighbour calls me Frits … but I think Harry sounds better, pronounced the English way. I don’t know any other cat around with that name! 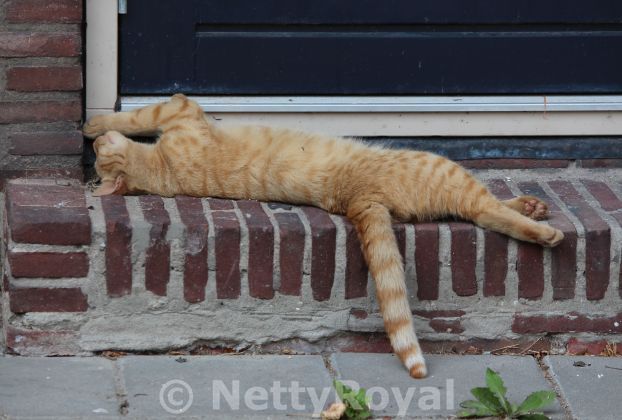 4 thoughts on “Prince Harry: The adventures of a royal cat (1)”

Who is your favourite Dutch Royal?