NettyRoyal
2 Comments on Stavoren – my “own” exhibition

Yesterday afternoon my mother and I took the train to the small Friesian town of Stavoren. Luckily it wasn’t too cold, but also not as warm as the previous 1 1/2 week had been. It was somewhat colder than on 14 June 2013, but I don’t think it was less windy.

Some months ago a couple contacted me. During the royal visit to the Province of Friesland on 14 June 2013 she had presented King Willem-Alexander and Queen Máxima with a cute dress from her collection, and they found out that I had made a few pictures of that moment. He had taken pictures of course, but standing in the public himself, it was almost impossible to take pictures of the presentation. Of course I didn’t mind giving them my pictures. It was not likely they would find many pictures of it, because only the press in the small press area had full sight of what happened. The public was standing on one side of the road facing the water.

Recently I was contacted again. As I already knew, they wanted to exhibit photos taken by the husband, me and some others, in the fashion atelier “Pyke Bos” in Stavoren. This nice small clothes shop is owned by lady who presented the dress to the royal couple. As the sign behind the shop window says: “Girls dress from own atelier. Beautiful Amalia collection for real princesses …” We loved the shop, and it was just a pity we don’t know any girl who we could buy the cute handmade dresses for. She also sells some clothing for grown ups by the way.

We had a cup of tea and a look around in the shop. And of course we admired the wall full of pictures of the visit. Four of my pictures (the four on top, starting on the left of the picture above), two by a local photographers, quite a few of the husband, and a few others made by someone else who had been watching the event from a boat. Very nice to see all of them. I think this is the first time ever my photos are exhibited, so you can imagine I am a bit proud of it. The exhibition can be seen during the whole summer. So if you accidentally are in Stavoren, just have a quick look. The shop is in the harbour (Havenweg 13), so very easy to find. 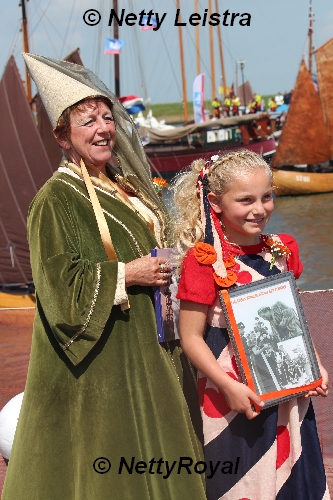 A small request … is there anyone who has pictures of the moment that this young girl, Anna de Vries, handed flowers to Queen Máxima? The family is already looking for photos for a year and haven’t found any. She wore the same Friesian dress her grandmother wore, when she handed over flowers to Queen Juliana many years ago. They would love to have a picture of Anna with Queen Máxima to hang next to the picture of her grandmother with Queen Juliana’s.

2 thoughts on “Stavoren – my “own” exhibition”

The royal events I really would love to attend one day