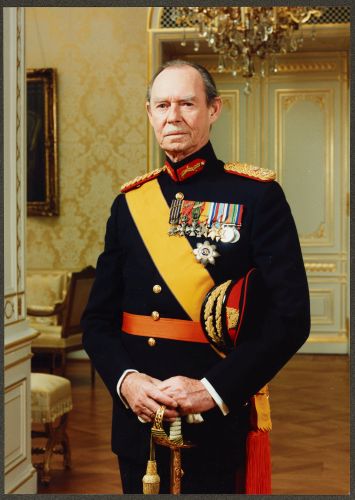 98 is a wonderful age to reach, if you are relatively in good health. Grand Duke Jean of Luxembourg seemed to do quite fine and appeared in public for the last time at the international conference Stand Rise Speak Up, organised by his daughter-in-law Grand Duchess Maria Teresa, late March. On 13 April 2019 it was communicated that he had been admitted to hospital with a suspected lung infection. While on 16 April his condition was qualified as favourable, and his health was improving, the news on Sunday 21 April was that his health had considerably worsened on Saturday night, and that the family had gathered around him.

On Tuesday 23 April 2019 the news that everybody feared was released at 6.00am: the grand duke had died. In a statement his eldest son Grand Duke Henri announced: “It is with great sadness that I inform you of the death of my beloved father, His Royal Highness Grand Duke Jean, who passed away in peace, surrounded by the affection of his family.” Three hours later Prime Minister Xavier Bettel announced that Grand Duke Jean had died at 12.25am on Tuesday morning. The state funeral is to take place at the Notre Dame Cathedral in Luxembourg-City on Saturday 4 May 2019, at 11am.

Jean Benoît Guillaume Robert Antoine Louis Marie Adolphe Marc d’Aviano was born on 5 January 1921 in Colmar-Berg, Luxembourg, as the eldest child of Prince Félix of Luxembourg, Prince of Bourbon-Parma, and his wife Grand Duchess Charlotte of Luxembourg. On 9 April 1953 he married Princess Joséphine-Charlotte of Belgium in the cathedral of Luxembourg-City. The couple had five children: Marie-Astrid (* 1954), Henri (* 1955), Jean (* 1957), Margaretha (* 1957) and Guillaume (* 1963). Jean reigned Luxembourg from 12 November 1964, when his mother abdicated, to his own abdication on 7 October 2000.

The beautiful flowers in the New Church