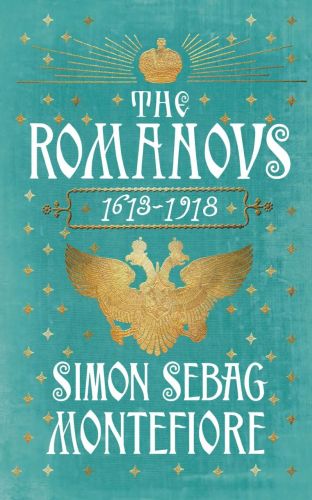 It took a few weeks, but it was worth the wait for the book “The Romanovs 1613-1918” by Simon Sebag Montefiore that was published in 2016. I decided to borrow it from the library in Dutch, as the reviews had made me curious. Especially as of course it soon will be 100 years ago since the Romanovs lost their throne and Russia became a republic.

Russia with its always changing borders had been a monarchy already for many years when on 21 February 1613 the 16-year-old Michael Romanov was chosen by a national assembly as the new Tsar. Only on 24 March 1613 the news actually reached the new Tsar himself. Almost exactly 305 years later -on 2/15 March 1917 – Nicholas II, considered the last Tsar of Russia abdicated. His younger brother who was to succeed, Grand Duke Michael, signed his renunciation one day later. On 1 September 1917 n.s. Russia was officially declared a republic. In June 1918 Michael was executed in Perm, where he was helt a prisoner. Only one month later his brother Nicholas II, his wife Tsarina Alexandra and their children Olga, Tatiana, Maria, Anastasia and Alexei underwent the same faith in Yekaterinburg. Other family members managed to escape the country or already lived abroad. But the Romanov reign had definitely come to an end.

This fascinating book isn’t a boring account of political decisions and wars, but a story of triumph and tragedy, love and death. With use of archival material the author manages to let the world of the Romanovs come alive. Interesting personalities living in a world full of palace conspiracies, coups, murders, family rivalries, sexual decadence and wild extravagance, facing enormous challenges. As well as their entourage of adventurers, courtesans, revolutionaries, poets, politicians, who could never be quite sure about their position and even their lives … At the court of Peter the Great you could find drunk people, naked dwarfs, fancy dress, Elisabeth and Catherine the Great had numorous male favourites. All Tsars and Tsarinas have all found their own place in this 750-pages thick book – that is excluding the bibliography, the notes and the name index that add another 130 pages to the book. Of course there is less known about the first tsars and more known about later tsars and tsarinas. The last 150 pages of the book cover the life of Tsar Nicholas II and his family. And of course there is a role in it for Grigori Rasputin, the peasant and mystical healer, who had so much influence on the lives of Nicholas and Alexandra.

Despite of the book being very interesting, it took me quite a while to finish reading, even when I don’t mind books being thick. Whether it is the dark winter weather – I have no problems with other books it seems – or the font type I am not quite sure. There were also explaining notes at the bottom of pages sometimes and often I didn’t manage to find the asterisk in the text. The book contains some nice illustrations of the tsars, and what I appreciated a lot were the simple family genealogies, although I used a bookmark so I didn’t need to search for it all the time. The book starts with an index of the chapters in the book and a map of Russia that clearly shows the changing of its borders between 1613 and 1917.