NettyRoyal
3 Comments on Book tip! The Assassination of the Archduke 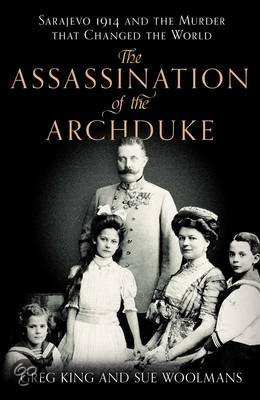 When there is one book you should read at the moment it is “The Assassionation of the Archduke. Sarajevo 1914 and the Murder that Changed the World” by Greg King and Sue Woolmans.

On 28 June it is 100 years ago that Gavrilo Princip assassinated the Austrian Crown Prince, Archduke Franz Ferdinand, and his wife Sophie, Duchess of Hohenberg, during their visit to Sarajevo, capital of Bosnia and Herzegovina. This led to the outbreak of the First World War only weeks later. The three huge European Empires at the time, Germany, Russia, and Austria-Hungary, did no longer exist when the war came to an end somewhat more than four years later.

Unlike many books about the subject, this book is not only focused on what happened in Sarajevo. The book starts with a biography of the life of Franz Ferdinand, his education, health issues, travels and his relationship with several family members, including his uncle Emperor Franz Josef of Austria. Franz Josef hardly ever informed his nephew about state affairs as soon as Franz Ferdinand became the Crown Prince. The book gives an account of Franz Ferdinand’s thoughts on certain issues, and it would have been interesting to see how he would have been as an Emperor. Unfortunately that was not to be.

Franz Ferdinand would marry for love, unlike many other archdukes. According to the Family Statutes he was to marry a Catholic woman who was of equal rank. However he fell in love with a mere aristocrat, Countess Sophie Chotek, born in 1868. Twenty years later, in 1888, she became a lady-in-waiting to Archduchess Isabella of Austria. In the years to follow Franz Ferdinand and Sophie fell in love. Only in 1900 the Emperor gave his permission to the couple to marry. In the book you can read all about their relationship, the struggle to get permission and its consequences. Franz Ferdinand would be the Crown Prince, but his children would never have the right to succeed, nor would they ever be archdukes or archduchesses. Despite of their marriage Sophie was never fully accepted by the family of her husband and some people at court, although it seems that quite a lot of people and several foreign royals did. I must really admire her for her strenght to cope with the Austrian court. The couple had three children: Sophie (1901), Max (1902) and Ernst (1904). Another son was stillborn in 1908. And it appears to me that Franz Ferdinand and Sophie were doting parents. I loved reading in the book about their family life.

It is not until halfway the book that the story of the visit of Franz Ferdinand and Sophie to Sarajevo starts. A visit that actually should never have happened, if people involved in the organisation had listened to each other and to rumours about an attack. You could also wonder why this specific visit was to be held on 28 June, St. Vitus Day, a date of special importance to ethnic Serbs. The final plot and the events on 28 June 1914 are extensively described in the book. Just read and shiver … After his death Franz Ferdinand – the heir to the throne of one of the biggest empires in the world – was not to have a state funeral. He and Sophie were buried at their castle in Artstetten. And it is so sad to read how in the end the funeral events were held. They really had deserved something better.

Interesting enough the book doesn’t end with Sarajevo. The last part gives an account of the often difficult life of the couple’s three children, especially in World War II. But one also learns about the fate of the assassin of the couple, Gavrilo Princip and his accomplices. All of her life their daughter Sophie, who died in 1990, years after her two younger brothers, would keep on defending her parents and take care that they would never be forgotten. The same thing is done by several descendants of the three siblings, who have been talking to the media recently about their ancestors.

The foreword of the book was written by Princess Sophie von Hohenberg, a great-granddaughter of the couple that was killed in Sarajevo. A great help, especially for people who don’t know the family very well, are the genealogies of the Habsburg, Hohenberg and Chotek families, a map of the Austria-Hungarian Empire, and a list with characters in the book. In the back of the book is a good index, as well as a list of notes and a bibliography (both could have been printed smaller though). In the middle of the book are several pages with lovely illustrations, so you can see what the main persons in the book really looked like. On the cover of the book is also a lovely portrait of Franz Ferdinand and Sophie with their three children.

3 thoughts on “Book tip! The Assassination of the Archduke”

Royal souvenirs from the UK

Elisabeth in Concert – An Unforgettable Experience