The Eighty Years’ War that led to the independency of the Netherlands didn’t exactly last 80 years, although usually it is said the war took place between 1568 and 1648. The Dukes of Burgundy between 1384 and 1428 managed to expand their territory in what now is the Netherlands, Belgium, Luxembourg and the north of France. Mary Duchess of Burgundy in 1477 married Maximilian, the later Holy Roman Emperor. Upon the death of his mother in 1482 their son Philip IV inherited his mother’s possessions, and in 1506 his son Charles V. In 1555 his son Philip II became the sovereign of the Habsburg Netherlands, an area that during the Habsburg rule even had become bigger. The personal union of seventeen provinces had however little in common.

Political tensions became bigger when the non-liberal Philip left the area in 1559. Protestant movements had become more powerfull, while the Catholic Philip didn’t tolerate other religions and and reorganised the Catholic Church in the Netherlands, a very unpopular move. The new Archbishop of Mechelen was also the head of the new church hierarchy, Granvelle. In 1559 Philip also sent his halfsister Margaret of Parma to the Netherlands as the governor. The Dutch nobility lost control, and even William the Silent, Prince of Orange – a favourite of Charles V – lost his position more and more, especially after in 1561 he had married the protestant Anna of Saxony.

400 Lesser Dutch nobles, both Protestant and Catholic, on 5 April 1566 handed over the so-called “Compromise of Nobles” to Margaret of Parma, asking the end of the Inquisition. She promised to forward the petition to the king, but in the end Philip rejected. In the meantime Protestant open-air sermons and meetings had been held more often and Protestants had come back from their exile. In August 1566 this led to the “Beeldenstorm” (Iconoclastic Fury), in which religious images in Catholic churches were destroyed. Philips answer was the arrival of the Duke of Alba, as a replacement for Margaret, in 1567, and a complete army. He installed the Council of Troubles to punish the leaders of the political and religious troubles. He also increased taxes. The nobles and Protestants united again and this time for good.

The Battle of Heiligerlee on 23 May 1568 – now 450 years ago – is largerly regarded as the start of the Eighty Years’ War, when the Protestant troops managed to conquer a part of the present-day province of Groningen. There were however not always successes during the next 80 years. In January 1579 the Southern Netherlands (Belgium/Luxembourg) signed the Union of Arras and expressed their loyalty to the Spanish king and recognised his governor. Two weeks later the northern provinces signed the Union of Utrecht, uniting them, which is regarded as the foundation of the Republic of the Seven United Provinces.

Between April 1609 and 1621 there was the Twelve Years’ Truce, a period of peace, which however didn’t last. The war ended with the Peace of Münster in January 1648. The independent Dutch republic was finally recognised. 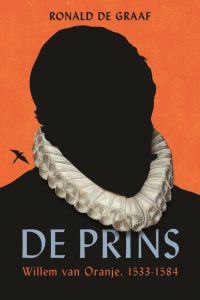 I recently read “De Prins. Willem van Oranje, 1533-1584” (The Prince. William of Orange, 1533-1584) by Ronald de Graaf (Uitgeverij Karmijn, Elburg, March 2018). Almost 1,400 books, articles, etc. have been written about William, the first leader of the Dutch Revolt, who was murdered in 1584. This book aims to be a biographical portrait, with William in the centre. For the first time the writer had made use of the letters of Count Günther von Schwarzburg, who was married to William’s sister Catharina. Despite of trying to be a biography, there are a lot of political and militaristic details in the book. Which is quite understandable as there is of course a limited amount of sources from that time. But you will also learn a bit about his marriages. It struck me that the father of the fatherland, as William often is called, despite of his military experience, actually was rather indecesive at the start and only slowly grew in his position. De Graaf luckily doesn’t only show the great sides of William, but also his mistakes. Also the leaders of his army weren’t always the strongest persons or were more often working on their own position, and there always was too little money. Overall a good and interesting read!

There are many names in the book, and sometimes you really need to go to the name index in the back to see who might be meant. Also I thought that the use of Dutch versions of German names and titles is a bit old-fashioned. What I however really did like was the illustrations in the book, and I did like the rather non-conventional cover of the book. And the name index and bibliography in the back of the book are quite extensive and useful.

Other books (all in Dutch unfortunately I think):

On 28 September the NTR starts a TV-series in seven parts called “80 Jaar Oorlog” (80 Years War) with stories from all over the Netherlands and abroad.

On 30 September the NTR also starts an historical comedy called “Welkom in de 80-jarige Oorlog” (Welcome in the Eighty Years’ War). It is supposed to be an hilarious talkshow with William of Orange, his son Prince Maurits, King Philip II of Spain and the Duke of Alba.

At the Nationaal Militair Museum in Amersfoort one can visit the exhibition “Willem” from 25 April to 28 October 2018. The exhibition is about William the Silent, Prince of Orange.

From 12 October 2018 to 20 January 2019 the Rijksmuseum in Amsterdam shows the exhibition “80 Jaar Oorlog. De geboorte van Nederland” (80 Years War. The Birth of the Netherlands”.

Between 19 October 2018 and 3 March 2019 one can visit the exhibition “Willem van Oranje is hier!” (William of Orange is here) at the Museum Prinsenhof in Delft, which is also the building where he was killed in 1584.

The Royals and Social Media