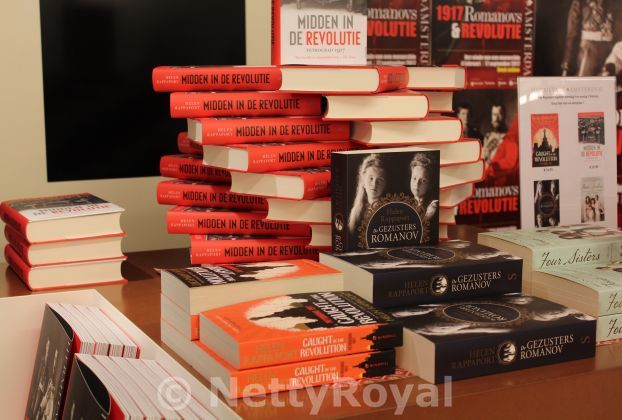 The opening weekend of the exhibition “1917. Romanovs & Revolution” at the Hermitage Amsterdam, The Netherlands, started off brilliantly. The opening was on Friday 3 February 2017 and afterwards followed a busy weekend with already many visitors. On Saturday there was a special event for the Friends of the Hermitage with a very well-attended lecture by author Helen Rappaport about her passions: the Romanovs, the Revolution and Russia. She gave another lecture at the Hermitage on Sunday 5 February: “Caught in the Revolution”. her newest book about the subject. It was the first time she presented this lecture to an audience. A rather small group of people, but all of them clearly very interested and enthusiastic.

More than once I had heard her speaking enthusiastically during the legendary royal weekends in Ticehurst, Great Britain, which must have started at the time of the publication of her book “Ekaterinburg”. I was happy finally hear her speaking again. If anybody can bring stories alive, it is Helen Rappaport. So if you ever have the chance and are interested in the subjects she writes about, don’t miss that talk.

Her books of course were prominently on display in the museum shop as she was around part of the weekend. And they did seem to sell well. Helen had to sign lots of books, both the English and Dutch versions. Including mine that I only bought in the shop that morning and hope to read soon. But back to the lecture I attended on Sunday. The title said it all: “Caught in the Revolution”. But what was it exactly about? No royal subject this time, but very closely related. Having written books about the Romanovs, Stalin, and Lenin, Helen Rappaport found herself another subject: the stories of foreigners who were in Petrograd (the name of St Petersburg at the time) during the two revolutions in February and October 1917 and in the time between these events. People who were eye witnesses of a turning point in the history of Russia.

Who were these people? For example the ambassadors of Great Britain, the USA, France, the Netherlands and other countries. Furthermore there were nurses working in the city, reporters and photographers covering the events. One of the people who came to Russia at the time was the famous suffragette Emmeline Pankhurst.

In the beginning all people wanted was food. Because of World War One there was shortage of all kind of basic needs. Helen Rappaport during her most interesting and entertaining lecture explains which events led to the first revolution. How many people actually died during these events is still unclear. There are no official numbers, but it could have been thousands. After the revolution Lenin returned to Russia after an exile of 16 years. You can wonder whether there ever would have been an October Revolution if he hadn’t turned up. People had other things to worry about, they soon had enough of revolution, instability and violence. And the imperial family that had lost their throne was all too soon forgotten.

And that leads to the subject of Helen Rappaport next book, already her 14th: “The Race to Save the Romanovs. How the World Failed Russia’s Last Imperial Family”. What did their European royal relatives and allied governments do to rescue them from their terrible faith? Any serious suggestions and offers of new information are more than welcome. Helen can be contacted at her own website. She plans to publish her book in time for the centenary of the execution of Tsar Nicholas II, Tsarina Alexandra and their children Olga, Tatiana, Maria, Anastasia and Alexey in July 1918. A centenary that surely shouldn’t be forgotten. 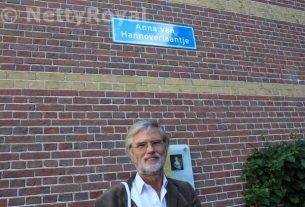 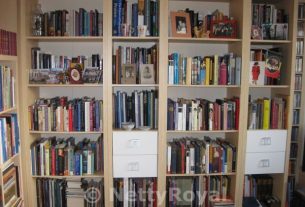 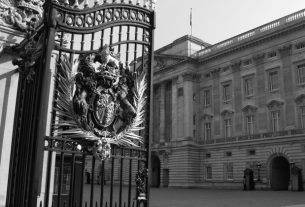