In April 2016 Princess Christina, Mrs Magnuson – the youngest sister of King Carl XVI Gustaf of Sweden – published her book “Dagar på Drottningholm”. I thought actually that it was only published in Swedish, but it turns out that almost at the same time also an English version was published, a fact that I totally missed. It was such a big surprise for me that when I recently visited the bookshop “Van Hoogstraten” in The Hague, Netherlands, I found the English version “Days at Drottningholm”. Of course I bought it immediately. 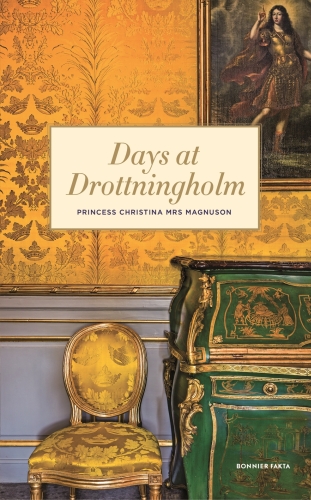 Already the look at a gorgeous slipcase with a picture of the Yellow Salon at Drottningholm and its eighteenth-century bureau with a green japanned finish –  makes one happy. Inside is a book with a jacket showing the wallpaper from the Yellow Salon. A very rare, but wonderful look for a book nowadays. Although Princess Christina never actually lived in this palace, she visited since her early childhood and it was the setting for some of the most important events in her life. Her great-grandparents, her grandparents and later also her brother lived here. She has many memories of the palace which she happily shares in the book. According to the text on the slipcase she has always been fascinated by the interiors of the palace, its grounds and theatre. For the book she collaborated with arts writer and journalist Carl Otto Werkelid and photographer Ralf Turander.

I have seen the book being described as a “lavishly illustrated volume”. The first thing I noticed when looking through the book was that there was very little text and lots of pictures, which was a bit of a disappointment at first. Furthermore the format of the book is not very big and the paper a bit too thick to my liking. That is soon all forgotten when you start reading and looking. The book starts with a preface by Princess Christina herself. The first part of the book tells about the Swedish royals that influenced the palace most: Queen Hedvig Eleonora Queen Lovisa Ulrika, King Gustav III, Queen Josephina, King Gustaf V and King Gustaf VI Adolf. Until the 20th century it were really the women who created Drottningholm. In case you get lost in the family connection, there is a simple genealogy in the back of the book.

Only in the second part some really lovely memories of Princess Christina come to light. She writes about the Christmas celebrations of the family at Drottningholm, her pride for her grandfather King Gustaf VI Adolf who did order several renovations and changes during his reign, her brother moving in with his family in 1981, making it a permanent royal residence for the first time. I really loved reading about the memories of her own wedding. She got married in Stockholm, but afterwards they took their guests to Drottningholm for further celebrations. The start of a tradition, as since several big family celebrations like birthdays and weddings were (partly) celebrated here. At the end of the book Princess Christina wonders what the future will bring to the palace. Once again a royal residence, or will it be a museum?

Dominating the book however are the beautiful pictures of the palace, often with short texts revealing some of Princess Christinas favourite items and places in and around the palace. It is interesting for example that the colour schemes of the Chinese Pavilion was an inspiration for the décor at her own home. The book also has a few personal pictures of the present-day Swedish royal family. These do want me to return to the palace I only saw once about ten years ago, and have another look with the book as a guidance.

Publishing House: Bonnier Fakta. The book among others is on sale in the Royal Book Shops in Stockholm and Drottningholm.