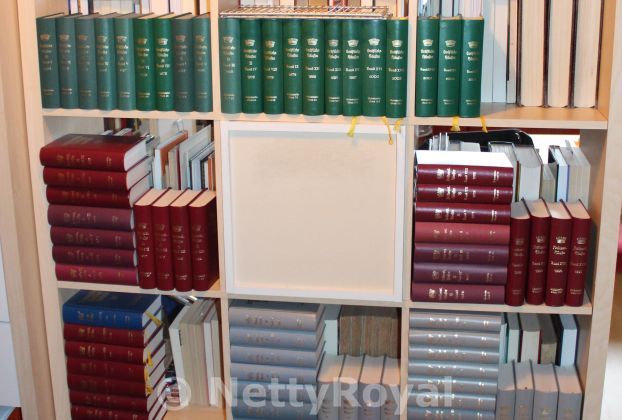 The original “Almanach de Gotha” was published yearly between 1763 and 1944. Occasionally you can still find copies in second-hand bookshops, but they are rather rare. Between 1763 and 1784 they were published by C.W. Ettinger in Gotha, from 1785 by Justus Perthes Publishing House in Gotha. They didn’t only contain genealogies of sovereign houses in Europe, non-reigning princely and ducal families, as well as mediatized families of comital rank, but also mentioned for example members of the diplomatic corps. The rather small booklets had sometimes more than 1200 pages. It must be said they also published books for , untitled families, barional and countal houses as far as I know. The archives were destroyed by the Soviet troups in 1944. In 1995 the family of Justus Perthes re-established its right to use the name “Almanach de Gotha”. They sold the rights to a company in London, called Almanach de Gotha Limited, that since has published several volumes. I saw some of the first volumes and wasn’t that impressed. In my possession are a few old issues of the “Almanach de Gotha”, as well as two “Gothaisches Genealogisches Taschenbuch” issues about barional houses, published by Perthes (that almost fall apart). Some books can be found in online libraries, see for example here.

The successor of the old Almanach de Gotha’s however was the “Genealogisches Handbuch des Adels”, since 1951 published by the C.A. Starke Verlag in Marburg an der Lahn, Germany. Since 2015 the books have been published by the own publishing house of the Duetsches Adelsarchiv and the publication has been renamed “Gothaisches Genealogisches Handbuch“. There are four different series: the noble houses (untitled), the baronial houses, the countal houses and the princely houses (which includes also some non-German families). The intention is that two books a year are being published. I already for years have a subscription to these very informative books.

Another genealogy book is being published by the Vereinigung des Adels in Bayern e.V. and Bayerisches Adelsarchiv e.V. in Bavaria, Germany: the “Genealogisches Handbuch des in Bayern immatrikulierten Adels”. Although I have never seen any of these books, they are said to be rather good.

British noble genealogists rely on the books of Burke’s Peerage and Debrett’s. Burke’s publishes a variety of books: Burke’s Peerage, Baronetage and Knightage, Burke’s Irish Family Records, Burke’s Landed Gentry The Kingom of Scotland, Burke’s Landed Gentry The Ridings of York, Burke’s Landed Gentry The Principality of Wales and The North West, Burke’s Great War Peerage. They even published “Burke’s Royal Families of The World”. Unfortunately the last volume of these series was published in 1980 and contained the genealogies of royal families in Africa and the Middle East. There were rumours in the past years about a new volume, but nothing has been published since unfortunately. I’d especially like to have a look at these non-European royal families as some genealogies are rather hard to find. Debrett’s among others since 1769 publishes “Essential Guide to The Peerage“. You can still subscribe to Burke’s Peerage online, although that doesn’t give you entrance to the most up-to-date information, it is rather good and has an excellent search service too. I think Debrett’s had the same kind of service for a while, but unfortunately stopped.

Various other countries have their own noble genealogy books too.

If there are any other similar books, I’d love to know.