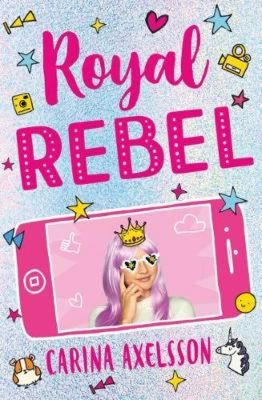 Reading children’s books? Why not? Even when you’re an adult, they can be quite fun, even if you might read it in a totally different way than most children or teenagers. When I was in London I had a quick look at Waterstones at Piccadilly to see whether they had “Royal Rebel” by Carina Axelsson. It was a bit hidden in a corner with books for children aged 9-12 I think, but I did manage to find it. The price was quite reasonable and the book even turned out to be a copy signed by the author … which I always love. I had read on her social media that she had been signing at the shop, so it was a nice surprise to see there were still a few signed books left.

After four volumes called “Model Undercover” Carina last year started with a series of books called “Royal Rebel”. While the first books were close to her former profession of a fashion model, the new ones are connected to another chapter in her life. Since at least 2005 she has been the partner of Prince Gustav zu Sayn-Wittgenstein-Berleburg and “splits her time between her UK writing bolthole and the fairytale forests of Germany”, as her publisher Usborne Children’s Books writes on their website. While the first “Royal Rebel” book was published in English in January 2019 (in French already in August 2018), the second volume will be out in the UK early June 2019. Her books have been translated in several languages. So what is “Royal Rebel” about?

Crown Princess Lily of Waldenburg has a secret. When she’s not writing speeches and practising curtsies, she’s filming amazing outfits for her style vlog, Tiara Girl. The trouble is the royal family would NOT approve. But as the royal rebel becomes an online star, can Lily keep her identity secret?

Carina has created a place lots of people dream about: a tiny Queendom, ruled by females already for 900 years, where queens actually can abdicate. A matriarchal society, where men take their wife’s surname and where titles don’t pass on in male line. The French border is not far away, so it must be somewhere in Germany. Waldenburg actually does exist, and I guess Carina might have taken the name from the Hohenlohe-Waldenburg-Schillingsfürst princes.

Lily lives in a fairytale castle with walls, watchtowers, endless staircases and corridors and a ballroom. When browsing Carina’s Instagram, she researched (and sometimes visited) several palaces and castles to get inspiration: Chambord Castle, Neuschwanstein Castle, Ehrenburg Palace (ballroom), Friedenstein Castle, Veste Coburg, Palace di Caccia di Stupinigi, the Louvre, the Vladimir Palace, Augustusburg Palace in Brühl and I am pretty certain you can count in the Amalienborg Palace too.

Whether her royal family and friends inspired here I can’t say, but I expect so, and I also found an example of something she must have read in the British media. In the acknowledgements it says she talked with some about thoughts and insight, and I’d say Carina also used her own experiences in the royal world. Some names in the book sound very familiar. Lily’s full names for example are: Lilian Athena Isabella Marie, aged 13 by the way. Don’t the names sound familiar to you? Like Carina herself she speaks several languages and has a Mexican father (Carina’s mother is actually from Mexico). A few royals even appear in the book with their actual name.

Readers get to know Lily, who has parents and a grandmother, who are constantly travelling. There is a mistress of the robes called Alice. As in the front it says “in loving memory of the real Alice, I immediately thought about Alice Trolle-Wachtmeister, who for many years worked at the Swedish royal court and Carina has certainly known her. You will read how Lily is prepared for the throne, but otherwise has a regular life, going to school and having a best friend who is not royal at all, and very important, a few pets. But although she has her dreams – she loves fashion and is crazy about tiaras – she just can’t do whatever she wants. But of course she tries to … 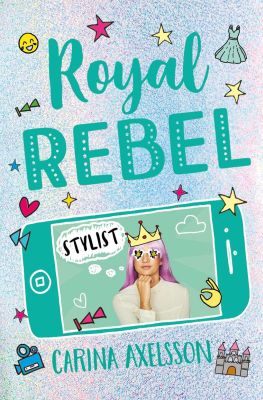 Throughout the book I read small things that sounded familiar, and it is nice to see that Carina picked things out that people, especially young girls, wonder about. When one digs deeper, she writes about the use of the Internet by young people/royals, what is it like to live in a castle, what is different in Lily’s life, what does she need to learn? She has added a bit of history of Waldenburg too and little facts all over the book that are fun, there are tiny illustrations all over the book too. What I really liked were the instructions to put on a tiara and a piece about evening gowns. At one point Grandmaman and Lily have breakfast, while the grandmother is already fully dressed for her engagement, including hat. I am really dying to know if that really happens, but I wouldn’t be surprised.

The books end with a nice list summing up some facts about Lily and Waldenburg. And don’t forget to read the acknowledgements, as there are some very familiar names mentioned. I am already looking forward to Royal Rebel 2 and read more about Lily.