NettyRoyal
Leave a Comment on UPDATE 18-11! 6th Royal Gatherings in The Hague

The European Royal History Journal and Van Hoogstraten for the sixth time (or was it the fifth time?) organized the conference Royal Gatherings in The Hague, The Netherlands, this year. The location was again the Park Hotel in the Molenstraat. The dates were Saturday 10 and Sunday 11 November 2018. Exactly 100 years after the end of World War I or the Great War as it is also called, the weekend was partly dedicated to the “eleventh hour of the eleventh day of the eleventh month” (armistice) and the consequences of the war for the European royal families.

The list of speakers for this year was rather interesting. I decided last minute to join the conference again. Unfortunately two lectures I had been looking forward to had to be replaced, but the program was interesting nevertheless with lots of German themes and a variety of speakers this year. As my eyes at the moment are not the best I decided to take a seat a bit more to the front. Which was also handy because the speakers again didn’t use a microphone, and some were not speaking that loudly. It was great to hear Werner Vermeulen speak about his passion for King Ludwig of Bavaria and also Gert-Jürgen Frisch gave a pretty interesting talk about King George V of Hannover.

The expert on the Romanian royal couple Carol and Elisabeth spoke about her projects and read from the letters they wrote to each other. I never knew that apart from a daughter who died young, she also suffered about 15 to 16 miscarriages. Moniek Bloks from the History of Royal Women blog has written her first book that will be published in January 2019 about Carolina of Orange-Nassau and spoke about it passionately. Good to know that she is working on her next project already. Arturo Béeche finished the first day with a lecture with photos and stories about Duke Carl-Eduard of Saxe-Coburg and Gotha.

During the breaks we were able to get something to drink and in the evening we all gathered at Bookstore at the Noordeinde for a French cuisine dinner.

The conference room at the Park Hotel

Spanish specialist and professor Dátivo Salvia Ocaña started the program on Sunday with a richly illustrated talk about the royal house of the Two Sicilies. Katie Tice spoke about the Kaiser Wilhelm II and his family and their role in World War I. The afternoon started with the most wanted lecture from Hugo Vickers about Queen Mary. I had brought my three books by him with me and managed to have them signed already in the early morning, after his lecture people were really queuing to get books signed too. The talk was most entertaining, and I am looking forwards reading more about her (I’ve not finished the original biography  yet).

As I still had a three-hour travel to make and was pretty tired (and my health still not superb) I decided to leave afterwards after having said goodbye to everyone I hope. I heard the last two talks were quite good also tough.

Tickets could be ordered via Van Hoogstraten or the European Royal History Journal. 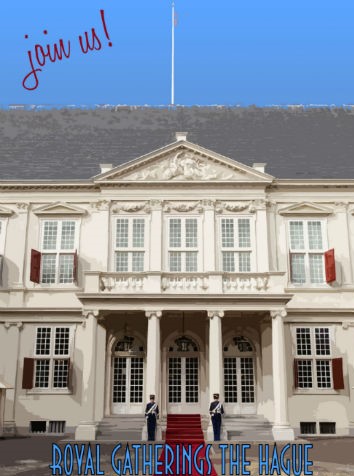