NettyRoyal
Leave a Comment on The Palace at the Lange Voorhout

Some people visit this place only because since 2002 it houses the permanent M.C. Escher exhibition of the Gemeentemuseum The Hague (Netherlands). However not so long ago this was a royal palace. I must admit I had never been here before and always forgot to visit. But on Saturday I had just over an hour left before closing time and decided to have a look at the palace. It was a rather busy day with lots of visitors. Not enough time for Escher himself, but maybe another time. I haven’t visited the café of the museum yet, which shows what the 19th-century interior looked like. Unfortunately the shop only sold Escher-souvenirs. 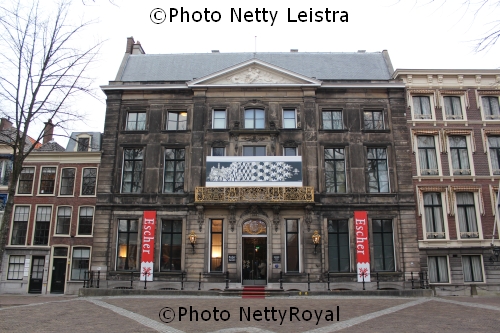 The Palace at the Lange Voorhout was originally designed by Pieter de Swart in 1760 for Anthony van Patras, mayor of the Friesian town of Sloten and the States General representative. Archibald Hope – member of a family that financed lots of European nobility – bought the house in 1796. In 1811 Emperor Napoléon I of the French spent some hours here. In 1896 Queen Emma of the Netherlands bought the building. After an extensive renovation she moved into the building in 1901, after the marriage of her only daughter Queen Wilhelmina. She had a new staircase up to the first floor built, that visitors now can climb themselves. Only Queen Emma herself and her two most important ladies-in-waiting were allowed to use it. The servants used the staircase running unnoticed on the left side of the building. Nowadays you use these stairs to reach the second floor, that was never used by Queen Emma herself. The garden room became a ballroom, Queen Emma also added stained glass windows and paintings above the doors. The bathroom even had hot running water. While in the Summer Queen Emma stayed at the Soestdijk Palace, this was the palace she used in the Winter.

In later days the Palace was used as the working palace by the princesses (and Queens) Wilhelmina, Juliana and Beatrix. Juliana for years started her ride in the Golden Carriage to the opening of the States General on Prince’s Day from this building and the family used to wave from the small golden balcony that is no longer used. Until 1984 Queen Beatrix and Prince Claus worked from this palace until the Noordeinde Palace was ready as a working palace. In 1991 the family sold the building to the Local Authority of The Hague.

Everywhere in the Palace you can see traces of its royal past: doors, wall decoration, ceilings, the staircase, fire places, glass stained windows … combined with modern Czechian glass chandeliers. On the side of the windows often some text in Dutch and English explains what the room was used for in royal times.

Maybe I should do the “Royal Palaces Walking Tour” next time I visit The Hague.

artCastleEscherexhibitionGemeentemuseumpalacePalace at the Lange VoorhoutQueen Emma of the NetherlandsThe HagueThe Netherlands

A Wedding Gift for Willem-Alexander and Máxima

The wedding dress of Princess Mabel