NettyRoyal
Leave a Comment on A private retreat – Frogmore House

When you’re walking on the Long Walk near Windsor Castle and look around you might notice a small building popping up in the distance behind some trees. This is the mausoleum of Queen Victoria and Prince Albert in the gardens at Frogmore House. The house itself is not visible from the Long Walk as far as I know. This is where Prince Harry of Wales and Meghan Markle have planned their private wedding reception the evening of their wedding, hosted by The Prince of Wales. It was also where they had their official engagement photos by (Prince) Alexi Lubomirski taken. 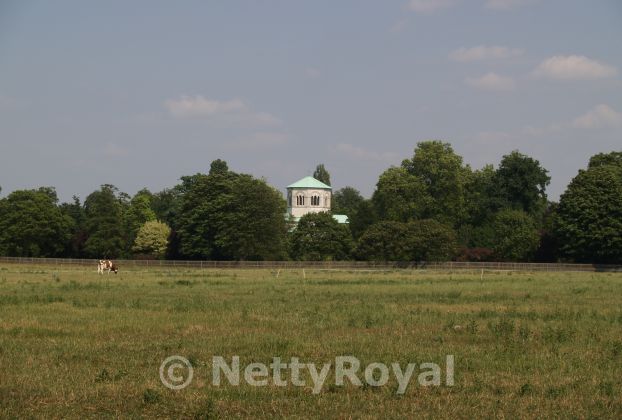 Frogmore House itself is nearby, within Windsor Castle’s Home Park. The house was originally built in 1680-1684 by architect Hugh May. King Charles II had ordered to had it built for his nephew on the estates of Great and Little Frogmore, which had been purchased by King Henry VIII in the 16th century. The Duke and Duchess of Northumberland leased the house from 1709 to 1738, and afterwards to other families.

Only in 1792 it became a country retreat for Queen Charlotte and her unmarried daughters. Charlotte had architect James Wyatt enlarge and modernise the house. In 1818 it became the residence of Princess Augusta, and as off 1840 of the Duchess of Kent, the mother of Queen Victoria, who died here in 1861. During a visit in 1864 the later Queen Alexandra gave birth to Prince Albert Victor in the house. From 1866 to 1873 it was the residence of Princess Helena of Schleswig-Holstein, Queen Victoria’s daughter.

The house was also used in the 20th century. The later King George V and Queen Mary resided here regularly between 1902 and 1910. King George VI and Queen Elizabeth spent part of their honeymoon at the house in 1923. In later years the family has sometimes used it for photosessions. They also love to use the follies in the gardens for picnics.

Days after the death of Prince Albert in December 1861 Queen Victoria choose a site for a mausoleum, which now stands on the west side of the gardens at Frogmore House. The building was designed by Professor Ludwig Gruner from Dresden and built by architect A.J.  Humbert. Albert was buried at the mausoleum exactly one year after his death. The decoration inside wasn’t finished until 1871. Queen Victoria herself was buried here in 1901.

Furthermore there is the mausoleum of the Duchess of Kent, Victoria’s mother, on a mound west of Frogmore House. In the grounds to the south of the Mausoleum of Victoria and Albert one can find the Frogmore Royal Burial Ground where several family members have been (re)buried since 1928. A full list can be found here. Burials here include the Duke and Duchess of Windsor.

In the 1980s the house was extensively restored and redecorated. Among others murals from the times of the Dukes of Northumberland were discovered.

Frogmore House and its surrounding gardens are usually not open to the public. The house opens its doors only on the three Charity Open Days each year. Proceeds are donated to specially selected charities and tickets can be booked via charities directly. In 2018 these days are 5, 6 and 7 June 2018, also right after the wedding, so tickets might sell out quickly. During August groups of 15 people can pre-book a tour of the house. For more information see here. The mausoleums remain closed.

Once a Royal Castle – Beverweerd

Fabergé exhibition at the Koldinghus