Queen Margrethe II of Denmark spends her corona-quarantine, including her birthday this week, at the Fredensborg Palace. She spends about three months in the spring and three months in the autumn at this residence, that has also been the setting for important events of the Danish royal family, like wedding receptions and birthday parties. Usually the monarch appears at her bedroom window early in the morning and waves to the crowds gathered below, but as these crowds are not allowed at the moment, one can wonder whether something similar will happen this year.

The Baroque Palace was built as a hunting seat for King Frederik IV 1720-1726 by building master Johan Conrad Ernst and designed by the architect and royal gardener Johan Cornelius Krieger.The still almost empty site was first used on 3 July 1720 for the signing of a peace treaty between Denmark-Norway and Sweden to end Danish participation in the Great Northern War. In honour the palace was called Fredens Borg (Peace Palace). The palace was meant to be a happy family retreat, but the king and his wife second Anna Sophie lost all their children at a young age.

An octagonal courtyard was placed in front of the main building, surrounded by single-storey servants’ wings. The wings however were pulled down by Frederik’s heir King Christian VI and the palace was most of the time abandoned. Also during the reign of King Frederik V there were alterations, and after the death of his wife Juliane Marie in 1796 the palace was hardly used anymore. It was not until King Christian IX came to the throne that Fredensborg was used as a summer residence again. He, his wife Louise, his children and grandchildren loved to gather here in the summer. And that has since been the case each summer. Crown Prince Frederik and Crown Princess Mary for several years lived in the Chancellery House and still use it regularly. It previously was the residence of Frederik’s grandmother Queen Ingrid.

The Dome Hall, measuring 15 by 15 metres and 27 metres high, is the heart of the palace and the setting for banquets and parties, and bridal waltzes. Inside the Garden Room, the Prince’s Salon and the Guard Room, one needs to have a proper look at the windows. Since the Danish monarchs receive heads of state here, they much scratch their names and date of the visit in the glass. There are 239 signatures now. There is also a nice chapel, the site of christenings, confirmations and even weddings. 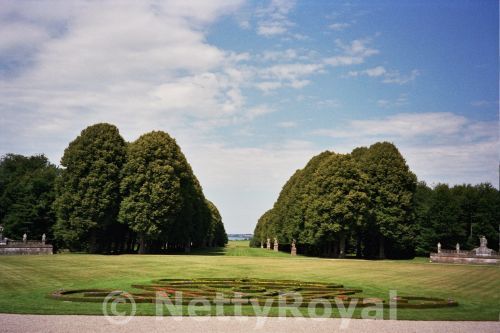 The palace isn’t located in Copenhagen, but further north on the shore of Lake Esrum, and is rather easy to reach by public transport and a bit of walking. The Palace gardens, the Baroque gardens and the valley of the Norsemen are open all year around and 24/7 for free. Mayor part of the 250-year-old garden has been restored to its 18th century splendour. Take your time when visiting and walk around the gardens and to the lake. On select days in July and August it is possible to visit Fredensborg Palace itself and its private gardens, including the orangery (built in 1995) and the vegetable garden, during a guided tour. Nearly every Sunday the chapel should be open for members of the parishes nearby. I have visited a few times, once in Summer, and even once saw the late Prince Henrik leaving the palace by car.