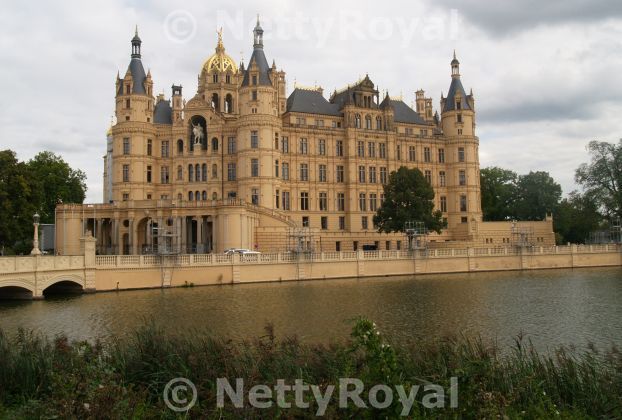 Looking at my pictures I really should go back and take better ones. I guess I was either in a hurry, or the weather wasn’t that great. The photos certainly don’t do the fairytale castle justice. Today King Willem-Alexander and Queen Máxima of the Netherlands started their three-day visit to Mecklenburg-Western Pomerania and Brandenburg at Schwerin Castle, Schwerin, Germany. As Willem-Alexander recalled in his speech at lunch at the castle:

“What a special experience, to be the guest at this beautiful place, where my great-grandfather spent his childhood.”

That great-grandfather was Duke Heinrich zu Mecklenburg-Schwerin, son of Grand Duke Friedrich Franz II and his third wife Princess Marie von Schwarzburg-Rudolstadt. He was born in Schwerin in 1876. During a visit to family at Schwarzbburg Castle he in 1900 met the Dutch Queen Wilhelmina. The couple married in 1901 and became the parents of Queen Juliana. Heinrich, or Hendrik as he was called in the Netherlands, died in 1934.

The castle is build on an island in the main lake of the city of Schwerin. Already since the 10th century there was a fort on this location. The city wasn’t founded until 1160. The descendants of Niklot, the founder of the Mecklenburg dynasty, purchased the county of Schwerin in 1358. By that time the family already held the title of Duke for ten years. They soon made Schwerin their main residence. The old fort was changed into a palace in the 16th century and between 1560 and 1563 the chapel weas built, the first new Protestant church in the duchy of Mecklenburg. Bastions were added in the 16th century also, to be able to defend the castle. 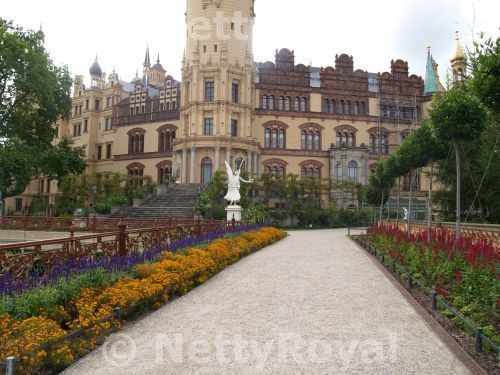 The palace was completely reshaped between 1635 and 1643 in the style of the Dutch Renaissance. Between 1756 and 1837 the family resided at Ludwigslust Castle, and upon return the castle in Schwerin turned out to be in a rather bad condition. Grand Duke Friedrich wanted to remodel the palace and have a new palace build several hundreds of meters away from the island, but he died and his son Grand Duke Friedrich Franz II decided not to move and have the historic site reconstructed compeletely. The architect Georg Adolph Demmler was inspired by the French Renaissance castles, while some designs were by Prussian master builders Semper, Stüler and Schinkel. The interior was designed by Heinrich Strack and carried out by craftsmen from Schwerin and Berlin. Between 1847 and 1857 also the big tower, the golden dome and the front portal were added.  The present style is Neorenaissance or Historism, an imitation of ancient and medieval castles.

One third of the palace was destroyed by a fire in December 1913. Only five years later the last Grand Duke zu Mecklenburg abdicated and the palace became state-owned. Only the ghost “Petermännchen” (Little Peter) stayed and still walks through the halls of the castle. Although invisible he has his own statue at the castle nowadays. The castle turned into a museum and between 1948 and 1952 it was the seat of the state parliament. From 1952 to 1981 a college for kindergarten teachers was housed inside the castle, it was used as a hospital. Since the 1990 the state parliament of Mecklenburg-Western Pomerania has its seat here again. An extensive renovation should have finished by 2019. Since 1974 the castle is partly open to visitors.

The Museum at the castle is open from Tuesday to Sunday from 10am-6pm, and from 15 October to 14 April from 10am-5pm. The park is open all year and all day, and the “burggarten” closes after dusk. during the summer season there is a café at the Orangery at the base of the main tower. During the winter season the Schlosscafé inside the castle is open.