NettyRoyal
Leave a Comment on A Very Rainy Polterabend in Hannover

The photos are copyrighted and it is not allowed to pass them on or copy them without permission.

Whether bride and groom liked it or not, before the wedding of Hereditary Prince Ernst August of Hannover and Ekaterina Malysheva on 8 July 2017 the local newspapers had written it all. There was hardly a detail about the celebrations that wasn’t known yet. The reception after the civil wedding on 6 July 2017 had been at the Fürstenhaus, the private residence of the family near the Herrenhäuser Gärten. And the Polterabend – the pre-party the evening before the wedding – was to take place in the Brauhaus (brewery) Ernst August in the heart of Hannover. Not exactly the most private place. 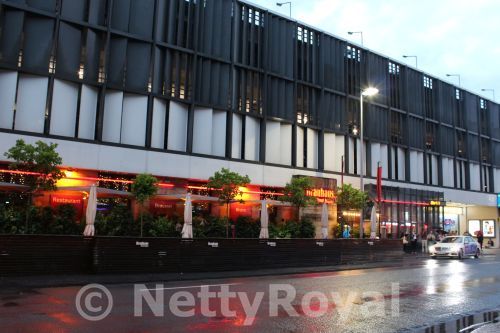 Most of the fans and media were already there around 6pm. We were able to use the chairs and tables outside the Brauhaus. The building was closed for the occasion, although in the next hours many people who wanted to eat there passed. The only interesting thing that happened was the friends of the bride, who had arrived early in identical black dresses, leaving and coming back with bags full of fruits. Bride and groom had invited about 300 guests for the evening, mainly guests under 40 years old, although we saw a few older ones. Trees had been placed in front of the windows, and some security guys made sure nobody was having a look through these trees. Until about 8pm actually nothing happened. We just sat and talked.

Among the first to arrive were Pierre Casiraghi, Beatrice Borromeo, Princess Alexandra of Hannover with her boyfriend. We recognised many guests. Bride and groom arrived seperately, the bride by car, the groom walked. But unfortunately after 7.30pm it started raining. At first it wasn’t too bad, but after some time it got worse and we weren’t even able anymore to stand it and hid at the garage entrance next door. Bad for the cameras too of course and it was dark pretty early that evening unfortunately. At 10pm we decided it was time to have dinner (McDonald’s, not my favourite but it was quick) and send off some pictures to the press agency I am working for. My friend Stig actually passed the Brauhaus again on his way to his hotel around 1am and had another look. Unlike in the evening he was even offered a drink.