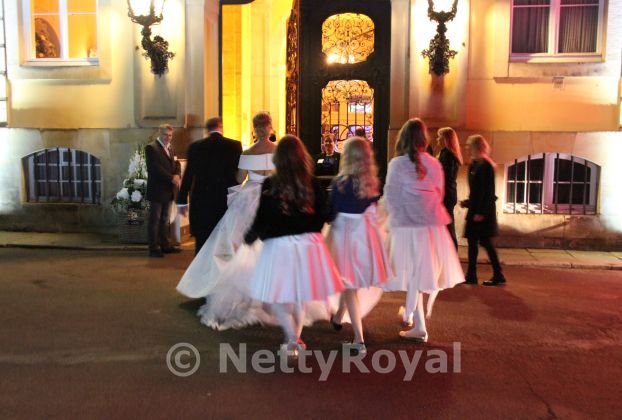 The wedding in Bückeburg continued in the evening of Saturday 9 October 2021 with a gala dinner and ball, the cutting of the cake and lots more. Already before the first guests, all in evening dress and some ladies with tiaras, arrived one could hear the music inside. The bride Princess Mahkameh zu Schaumburg-Lippe, still in her wonderful wedding dress, headed with her husband Fürst Alexander zu Schaumburg-Lippe from their residence to the main palace building around 8.30pm when it was already fully dark. Only the palace was lit in the Schaumburger colours – white, red and blue. The place itself was really dark, so I could hardly see anything. And as I am a really bad photographer in the dark all I have is a few not too clear photos, taken with my camera and handy. But at least the bride is on it. I actually do envy the media a bit that were allowed inside (Bunte and Point de Vue).

I could have stayed for the so-called “Fackelzug” (torchlight procession) in the late evening, but after having seen the bride and groom heading to their evening party, I thought it was enough and headed back to my hotel outside Bückeburg by train. Online one can however see an impression of the event, posted by the Blasorchester Bückeburger Jäger e.V. that notes on their Facebook site: “Together with the Bürgerbataillon, we gave the bridal couple Alexander and Mahkameh zu Schaumburg-Lippe another musical surprise with a festive serenade on their wedding evening.” Many guests seem to have watched from the balconies and windows of the palace.

The groom posted this cute photos of one of the wedding cakes on his Facebook site, saying: The fact that the smaller, vegan wedding cake looked like this not only depicts reality quite faithfully, it was also my own idea. For who doesn’t know: he spends quite a bit of time on social media.

One of the highlights of the day, according to several guests, was the speech of one of the witnesses, Pieter Haitsma Mulier, Reserve Luitenant Kolonel der Huzaren van Boreel (Reserve Lieutenant Colonel of the Hussars of Boreel), during the dinner in the evening. He is the husband of the younger sister of the first wife of the groom, and a very good friend of the bridal couple. I have his permission to post the text here.

Through the innocent eyes of our children who understand
affection, openness, and happiness.
It has become a custom to run past Alex and shout ………..MAHKAMEH!
It was clear 6 years ago that the joy they displayed is based on
• great kindness,
• perception
• and sensitivity.

Mahkameh is blessed with an abundance of feminine grace and charm.
You don’t have to spend much time in her company to realise that
the elegance that is so evident on the outside is reflective of an inner beauty of soul.
You have no notion of loving people by halves.

Dearest Alex,
Mahkameh has caught on to the fact that her husband is chivalrous,
loyal …
and overflowing with generosity of spirit.
• A genuine walking dictionary, with no unfortunate lack of curiosity
• An advent warrior for democracy and freedom of speech
• A general, ruthless, remorseless and relentless to those who Cross his path on Facebook……….
• A husband who is not judgemental ….
• and to his friends impartial

A match in compassion, thoughtfulness, and warmth.
Your passions are aligned……
I look at it as the Soul Music of Buckeburg….
Music does not lie….
And whatever your SOUL is made of?
Mahkahmeh can say His and Mine are the SAME.

Combine this gift with the love for A HOME here at Buckeburg…
Hence from today we would like Buckeburg to be known as the centre of the universe.
We can safely say — that these two are madly in love.
And it isn’t difficult to see why…..
• They are both highly intelligent,
• they share a passionate curiosity about humanity and life,
and there is an infectious joie de vivre between them
that makes them the best company.

Aristotle reminds us that
the highest form of love is something
much higher and more profound
than any feeling or emotion.
Real love is the recognition of the intrinsic goodness of the other
and the commitment to serve that good
and bring it to perfection.

People sometimes say that married love is all about give and take.
Not really.
True love is all give, give, give.
And sometimes it even involves FORgiving,
and asking for forgiveness.

The blueprint for this highest form of love is to be found in
that amazing passage from St Paul’s letter to the Corinthians:
• Love is patient,
• love is kind…
• it is not self-seeking,
• it is not easily angered….

The bridal waltz on “The Suite for Jazz” of Dmitri Shostakovich for which the couple even took some dancing lessons.

The party, according to the magazine “Bunte”, that has a six-page report, went on until 5.30am on Sunday morning. Music was played by the band of Craig Lees and DJ Philipp Count zu Eltz. 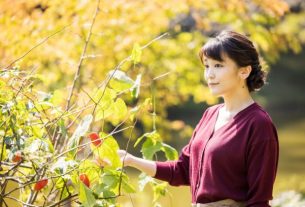 One month ago Kei and Mako got married 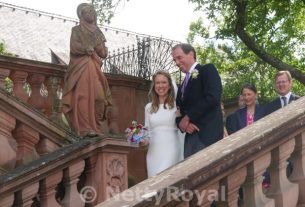