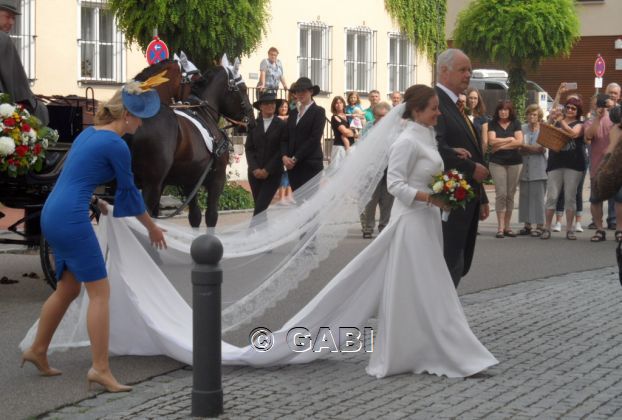 On 9 June 2018 Pöttmes, a place in Bavaria, Germany, had its own noble wedding. Already since the year 1281 Pöttmes is in the possesion of the Freiherren (Barons) von Gumppenberg, and was for a long time part of the Duchy of Bavaria. For many years they lived at the Burg on the Gumppenberg near Pöttmes, but the castle burnt down in 1704 during the Spanish Succession War. The eldest parts of the present castle, called Schloss Pöttmes or Schloss Gumppenberg, go back to 1683, but was mainly built in the 18th century. Both castle and garden are not open to the public.

A noble wedding is rare in Pöttmes anyway, so the interest of the people living there was enormous. The last big wedding in the House of Gumppenberg in Pöttmes was actually celebrated in 1907, when the great-great-aunt of the groom, Freiin Maria-Theresia (1888-1971) married Maximilian-Joseph Count von Deym, Freiherr von Stritez (1880-1934). His grandparents Wernher-Hyrus Freiherr von Schönau-Wehr (1916-2014) and Maria-Theresia Freiin von Gumppenberg (1922-2003) did get married in Pöttmes in 1943, but had a very small wedding because of World War II. The groom’s father, Johannes (1949-2012), was adopted by his maternal uncle Christoph Freiherr von Gumppenberg, and took the name Freiherr von Gumppenberg-Pöttmes-Oberbrennberg. He and his wife Teresita Countess Hoyos had five sons, of which the groom is the eldest. The bride was born in Augsburg, Germany, but grew up in Austria. She is the youngest of the four daughters of Count Alexander von Ballestrem (1943) and Marie Eleonore Mayer (1943), who got married in 1974.

Franziskus Freiherr von Gumppenberg (1985) decided to choose Pöttmes to get married to Katharina Countess von Ballestrem (1983). Because it was according to the local newspapers not possible to celebrate at home at the bride, they married in Pöttmes. The bride told the local newspaper that the huge interest in the wedding had surprised her. Katharina was driven to the church in a carriage, accompanied by her father. The mass was celebrated in the Parish Church of Sankt Peter und Paul, weeks after their civil wedding. There even was a message from Pope Francis. After the wedding bride and groom and their about 600 guests left for Schloss Pöttmes, where they celebrated in a big marquee in the garden.

The wedding of Willem-Alexander and Máxima in Amsterdam 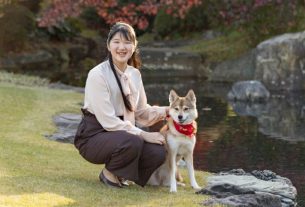 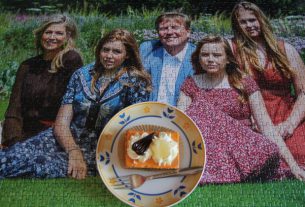 King’s Day with a twist