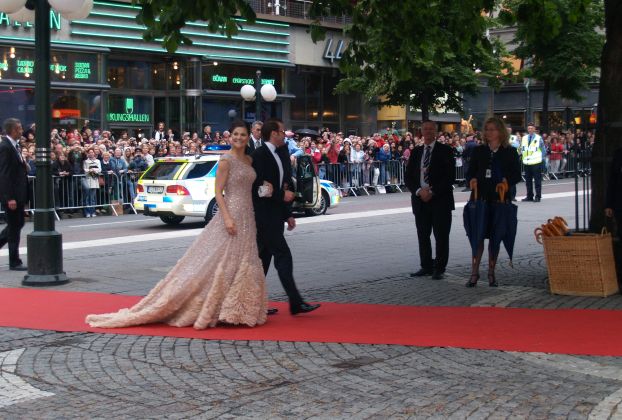 Unfortunately the weather on the day before the wedding of Crown Princess Victoria of Sweden and Daniel Westling wasn’t as good as hoped. In the afternoon it started raining heavily. Happily it was getting better towards the evening.

After a dinner at the Eric Ericsson-hall on Skeppsholmen there was a concert at Stockholms Konserthuset (concert hall), hosted by the Swedish parliament. The concert was attended by about 1600 guests. For the onlookers outside who wanted to see the guests arriving, it was good that there were only a few drops of rain. Umbrellas were hardly needed.

It however was quite cloudy and therefore it was dark sooner than I had wished for. I managed to find a spot in the press area in front of the concert hall, with great view on the arrivals. To be able to stand first row, I had to move to the side, where a tree blocked the bit of light on that part of the square. It shows in my pictures, lots of vague ones, especially when people were moving. I didn’t dare to use too much zoom.

Guests of course often didn’t stop for me, but only for the photographers further to the entrance. Some people were however willing to turn around for a wave, chat or photo. Crown Princess Margareta of Romania, to whom I had talked a bit upon her arrival at her hotel the previous day, waved, and I managed to tell Princess Máxima of the Netherlands that I loved her dress.

I thought it was a pity that I wasn’t allowed inside for the concert. The royals seem to have liked it very much and regularly sang along. Time to enjoy parts of the concert once again. And I go la la la la la she’s got the look …