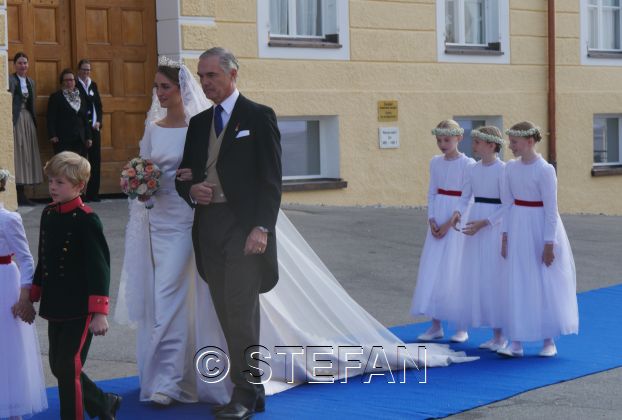 Duchess Sophie von Württemberg and her French groom Count Maximilien d’Andigné were rather lucky with the weather when the got married religiously at the church of Tegernsee Castle, Germany, on Saturday 20 October 2018. The civil wedding had taken place in private at Altshausen on 15 September 2018, during which the bride wore a short lace dress once worn by her maternal grandmother, and a necklace she received as a gift from her paternal grandparents. The engagement was announced in September 2017. The couple met in London

The groom was born in 1989 as son of Count Hervé d’Andigné and his wife Marie-Adélaïde de La Barre de Nanteuil. Also present at the wedding was his maternal grandmother Chantal de La Barre de Nanteuil. The bride was born in 1994 as daughter of Duke Philipp von Württemberg and his wife Marie Caroline Duchess in Bavaria. Present were her paternal grandparents Duke Carl and Duchess Diane von Württemberg, and her maternal grandparents Duke Max and Duchess Elizabeth in Bavaria.

The bride had her simple and elegant wedding dress created in Stuttgart. She wore a tiara from the Dukes of Württemberg. The veil is a family piece of the Dukes of Bavaria and was made out of lace from Bruges, Belgium.

Among the guests were many members of the families of bride and groom. Represented were a.o. also the families of Croÿ, France, Goëss, Hessen, Keglevich, Königsegg-Aulendorf, Liechtenstein, Quadt, Schulenburg and Waldburg.

In the evening the party took place at Tegernsee castle. Dress code: white tie, which meant lots of evening gowns and tiaras. The bride changed into a sleeveless dress. A huge difference from the previous evening when a traditional German “Polterabend” took place in a brasserie near the castle. There the bride wore a dirndl.

There are lovely reports in Bunte and Point de Vue.

The wedding of the Prince of Asturias and Letizia Ortiz Rocasolano 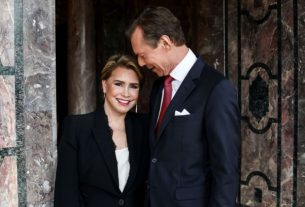