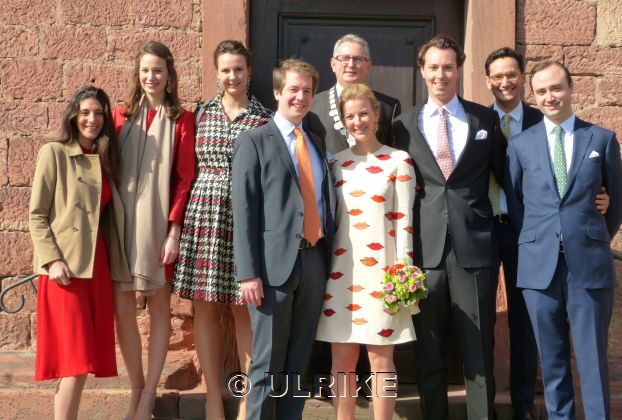 I’ve published this rather exclusive picture with permission of Ulrike. Please do not copy or post it elsewhere

It will be a busy year for the Princely Family zu Leiningen, as the two sons of Fürst Andreas and Fürstin Alexandra are getting married. The youngest of the two, Prince Hermann (* 1987) kicked off the royal wedding season. His civil marriage to Isabelle Heubach took place at the Refectory of the family castle in Amorbach on Saturday 25 March 2017 at 11am, after an engagement of over a year. The 45-minute long ceremony was led by mayor Peter Schmitt, and there was music from the Amorbacher Stadtkapelle. The religious wedding will take place in Austria on 1 July 2017. The couple met six years ago when Hermann was studying in Vienna.

The next party for the family will be on 29 April 2017 when the civil wedding of Hereditary Prince Ferdinand (* 1982) and Viktoria Luise Prinzessin von Preussen (Prussia; * 1982) will take place. Their religious wedding is to take place at Amorbach in September 2017. A rather special occasion as it will be the first marriage between two descendants of  Queen Victoria of Great Britain since 1981, when Fürst Andreas zu Leiningen married Princess Alexandra von Hannover.