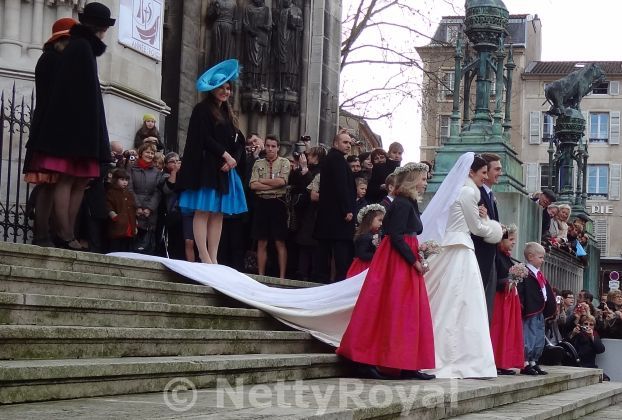 The last royal wedding of the year 2012 – as far as I know – took place in Nancy, France, on 28 and 29 December 2012. The civil wedding of His Imperial and Royal Highness Archduke Christoph Alexandre Henri Marie Marcus d’Aviano of Austria (* Meyrin, Switzerland, 2 February 1988) and Adélaïde Marie Béatrice Drapé-Frisch (* Les Lilas, France, 4 September 1989) took place at the town hall at the Place Stanislas in Nancy. The couple was married by the mayor of Nancy, André Rossinot. The ceremony started at 5pm and was attended by close relatives, including the Luxemburg grand-ducal family. After the civil wedding the couple appeared on the balcony of the town hall. They kissed each other already there.

Already in the morning they paid tribute to the Dukes of Lorraine at the ducal chapel of Les Cordeliers in the Basilique Saint-Epvre. The bridal couple laid a bouquet of roses in the chapel. A private ceremony was held by Bishop Jean-Louis Papin, who was also to lead the religious wedding the next day.

In the evening the bridal couple once again visited the church. Some of the younger guests enjoyed their evening in Nancy and were spotted by some royalty watchers.

The religious wedding of Archduke Chistoph of Austria and Adélaïde Drapé-Frisch took place at the Basilique Saint-Epvre in Nancy, France, on Saturday 29 December 2012. Nancy is the old capital city of the Dukes of Lorraine. The neogothic basilica was built between 1864 and 1874 and designed by architect Prosper Morey. It is situated at the Place Saint Epvre in the old town of Nancy. The basilica is dedicated to Saint Epvre, Bishop of Toul. The beautiful staircase was a gift of Emperor Franz Joseph I of Austria, as well as several stained glass windows (showing Saint François and Sainte Élisabeth) while Emperor Napoléon III of France and his wife Empress Eugénie also offered windows (showing Saint Louis and Sainte Eugénie). Since a few years portraits of Emperor Karl II and Empress Zita of Austria decorate the basilica.

Christoph is the second Archduke to marry in Nancy. His great-uncle Archduke Otto in 1951 married Princess Regina von Sachsen-Meiningen in the same city.

On the occasion of the wedding the church was beautifully decorated.

The choir Vox Pop, organist Fabre Guin, trompettists, the chorale de Philanthropos and its director Vincent Lugon were responsible for the music during the service.

The beautiful winter wedding dress of duchess satin was designed by Diane Lelys of Paris. The train was five metres long. The flower diademe was borrowed from the grand-ducal family of Luxembourg, from which the groom’s mother is descending. The veil of Alençon lace belongs to the Habsburg family.

After the wedding bride and groom once again kissed on the balcony of the town hall, where also the reception took place. In the evening the dinner and party took place at the Grand Hôtel de la Reine in Nancy. The bride got rid of the jacket of her dress, and also left the train and veil in the hotel. The groom changed into a smoking. The huge white wedding cake had bows and the top was decorated with macarons in six colours.

The bride herself was accompanied by her sister Alienor Drapé-Frisch.

The bridal children were accompanied by Claire and Anne-Laure.