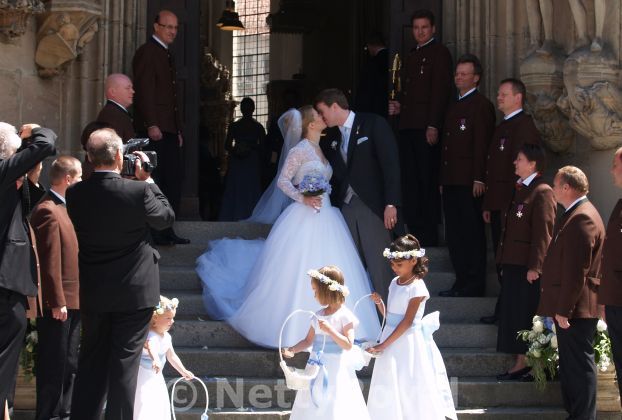 A wedding is always a good occasion to stay somewhere for a few days, and apart from the wedding see as much tourist attactions as possible. As the civil wedding was a private event and we didn’t know how late it started, me and my friend(s) decided to go sightseeing in Coburg. Around 2.30pm we were on our way to see the royal mausoleum. As we were near the house of Prince Andreas and Princess Carin von Sachsen-Coburg und Gotha, the parents of the groom, and the office of the family we decided we wanted to have a look what the house and the office looked like. Accidentally bride and groom also paid a short visit to the house, where outside the flags of Sachsen-Coburg und Gotha and the USA were proudly waving. The bride wore a lovely white-green summer dress. Just outside the office we bumped into Prince Andreas, and outside the house we met Prince Alexander, who had just arrived from Vienna, Austria. We decided that the wedding would take place later that day, but as we of course knew there was nothing to see, we decided to go on sightseeing.

From the newspaper we discovered the civil wedding had taken at 5pm in the Salon Belvedere of Callenberg Castle, in the outskirts of Coburg. The bride wore an elegant white lady’s suit, and had a bridal bouquet of white flowers. Present were only about fourty guests, among them the closest relatives and some good friends. The couple was married by the mayor of Coburg, Nobert Kastner. After the wedding there was a small reception. In the evening there was a dinner at the castle.

Another day of visiting the castles in and around Coburg, as well as doing some necessary shopping. We really didn’t go for it, but on our way in town we again met the bridal couple just outside a restaurant in town, where they were likely going to have lunch.

In the afternoon we visited Callenberg Castle, which closed one hour earlier than was said before. Preparations were already going on. Afterwards we were supposed to leave the area, although we also wanted to see the family cemetery. After some talking with the police, we got permission, but a policeman had to come with us.

Back at the bottom of the hill, we decided to stay there and wait for the guests of the Bavarian-American evening – with Bavarian sausages, American hamburgers and hotdogs and local beer. The almost 500 guests started arrived early in the evening. Some came by car, and others by bus or taxi. Happily for us some parked at the parking place near us, so at least we managed to see some of the guests. The guests were often dressed in traditional dirndl or lederhosen. A few of the guests were even willing to pose, like Mrs Alix von Miller zu Aichholz née Countess zu Castell-Castell with her sons and daughter-in-law. Even downhill we heard the yodel-music when the party really started. Halfway the evening we drove back to Coburg and had dinner in the same restaurant as where the bridal couple had enjoyed their lunch. Needless to say that the food was quite good.

Of course we arrived at the St Moriz Church in Coburg, where the religious wedding was to take place, early in the morning. Apart from two others and some people building up the press stand, there was nobody there yet. We were hanging around and talked a bit. Of course we had taken places opposite of the entrance of the church. Slowly other onlookers started to arrive, and the daily newspaper which covered the civil wedding was much read. The guests for the wedding only started to arrive around 11am. The guestlist turned out to be quite interesting, and included members of the royal families of Sweden, Belgium, Great Britain and Bulgaria. Outside the church were two big bouquets of white roses and blue hydrangea. Also the church was decorated with these flowers.

The groom arrived by car and waited for quite a while on the steps of the church, together with his five witnesses: Freiherr Dominic von Schwertzell zu Willingshausen, Andreas Arbogast, Jan Bunnemann, Arne von Ludowig-Rickert and Daniel Pohl. The groom wore a morning suit with a light blue tie. The five bridesmaids – Lisa Barash, Desiree Beutelspacher, Nikki Etter, Erika Rayman and Debra Wichser – arrived in light blue dresses. The three smaller flower girls had already arrived earlier waering white dresses with light blue sashes. The bride arrived around noon in a car together with her parents. The bride wore a wonderful white tulle dress, with wide skirt, and a lace top and small jacket, embroidered with gold daisies. The hair was put up in a knot, with small flower jewels in it. A long white lace veil was placed on top of the knot. Around her neck the bride wore a necklace of diamonds, a wedding gift from Prince Leopold, Duke of Albany to his bride Princess Helena zu Waldeck und Pyrmont. Christian Robert Rondestvedt, in his US Navy uniform, walked his daughter down the aisle.

After about one hour the church bells started ringing, and bride and groom came out of the church. At the door of the church they thanked the Pastor Markus Merz. Under loud cheers of the public the bridal couple exchanged a long kiss. The three little bridesmaids did their utmost best to strew rose leaves. The bridal couple was followed out of church by the bridesmaids and witnesses. In a copy of a carriage from Queen Victoria of Great Britain bride and groom drove through the centre of Coburg to the Ehrenburg Castle, where the reception took place in the Grand Hall. There they were greeted by three marksmen societies. Also loud salutes were fired from the park next-door.

In the evening a gala dinner and ball took place at Callenberg Castle. Most guests were driven straight up to the castle, so we only saw some people passing by in cars and busses. We could just catch a glimpse of bride and groom, the bride now wearing a family tiara. But some guests parked their cars at the parking place near us, so we were able to ask a few guests to pose for us in their beautiful evening gowns and sometimes wearing beautiful jewelry. The party took place inside the castle and on the terrace outside. The big wedding cake was decorated with white marchpane roses. The party only stopped long after midnight. On Sunday the bridal couple left for their honeymoon.

Biographies of bride and groom

The bridal couple met early 2007 in a restaurant in New York. They got engaged at Callenberg Castle in Coburg on 4 July 2008.

After finishing the Gymnasium Casimirianum at Coburg Hubertus served in the German army for two years. Afterwards he studied law at Würzburg, London and München. He was installed as a laywer in 2005.

Hubertus moved to New York in the autumn of 2006. There he started working for a German bank in the Private Wealth Management department.

In his freetime Hubertus likes to visit cultural and art events in New York. He furthermore likes to go hunting and travelling.

Kelly Jeanne Rondestvedt was born in Pencasola, Florida, USA, on 10 January 1975. She is the eldest child of Capt. Christian Robert Rondestvedt and his wife Cheryl née Forbes, who now live in California. She has two younger brothers: Christian and James.

Kelly visited Lenmoore High School in Lenmoore. In 1997 she finished her studies with a BA in economics at the University of California in Los Angeles. Afterwards she worked for Price Waterhouse Coopers in San Diego. From 2000 to 2002 she studied at the UCLA Anderson School of Management and received a Master in Business Administration. Afterwards she moved to New York where she works in the financial business.