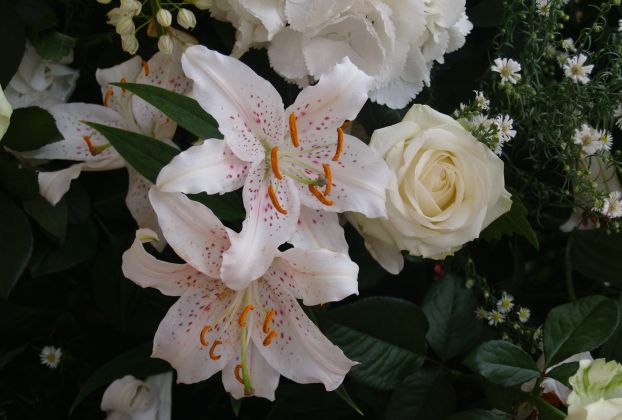 Over 20.000 people from all over the world lined the streets of Windsor. Some even camped out overnight to secure the best views of Prince Edward of Great Britain and Sophie Rhys-Jones during their carriage ride after tying the knot. Some 8000 people managed to get an invitation for the castle grounds during the wedding ceremony.

About 550 guests were to attend the wedding. They had to leave their cars outside the castle grounds and were taken to Saint George’s Chapel by busses. Some famous guests were musical composer Sir Andrew Lloyd Webber, Hollywood star John Travolta and singer Tom Jones. About 4:40pm the foreign royal guests arrived, completely dominated by the Sultan of Brunei who came with his two wives, who were dressed beautifully. The TV camera hardly had an eye for the other royal guests: Anne-Marie Queen of Greece with her son Nikolaos, Felipe Prince of Asturias (Spain), Crown Prince Haakon of Norway, Prince Joachim of Denmark with his wife Alexandra, Prince Guillaume of Luxemburg with his wife Sibilla, Prince Hassan of Jordan, Prince Georg of Hannover, and Prince Philipp and Princess Xenia of Hohenlohe-Langenburg. Some time later also the British royals came over. Present were Queen Elizabeth II (in lila with feathers in her hair) and Prince Philipp Duke of Edinburgh, the Queen-Mother (in light blue and with hat), Princess Anne and Tim Laurence, the Princes William and Harry, the Princesses Beatrice and Eugenie of York, Peter and Zara Phillips, Princess Margaret (in a wheelchair, still not recovered from burning her feet), her former husband the earl of Snowdon with his daughter Sarah and her husband Daniel Chatto, the Duke and Duchess of Kent, the Earl of St.Andrews with his wife, Lady Helen Taylor with her husband Tim Taylor, Lord Nicholas Windsor, Prince and Princess Michael of Kent with children Frederick and Gabriella and the Duke and Duchess of Gloucester with their daughters Davina and Rose.

During the entrance of the royal guests the groom Prince Edward walked with his best men, his brothers Charles and Andrew, to the Chapel. On their way the car of the Queen Mother passed them. Edward and his brothers entered the chapel and stayed in the chapel’s bookshop for a while to wait for the bride to arrive. About 4:55pm the car with the bridesmaids and pages arrived. The bridesmaids, Camilla Hadden (8) and Olivia Taylor (5), wore ivory with light blue dresses, a black cape and a black hat with white feather. The pages, Master Felix Sowerbutts (7) and Master Harry Warburton (6), wore black knickerbockers, white blouses and socks, black shoes, black cape and also a black hat with white feather. Olivia and Felix are children of friends of the bride, Camilla and Harry are godchildren of Prince Edward.

Prince Edward took his place halfway the chapel to wait for his bride. Exactly at 5:00pm local time Sophie Helen Rhys-Jones arrived with her father (who actually had his birthday) in a big black Rolls Royce at Windsor Castle’s Saint George’s Chapel, which was decorated with 101 bouquets of her favourite flower, sweat peas. The bride wore a simple ivory organza and silk dress made by designer Samantha Shaw, and ivory silk high-healed shoes. The dress was a long, fitted, panelled dress-coat with long sleeves. A total of 325.000 pearls and crystal sparkled down the back and the front of the dress-coat. The bride had a long white flower bouquet in her hands. As some of the guests the bride had some problems with the strong wind that blew her long white veil into the air, held on her head with a diamond tiara from the Queen’s private collection. Around her neck she wore a black-white pearl necklace with a cross, which was her wedding gift from Prince Edward who had designed it himself. Sophie gave him a gold watch.

After some organ music the Bishop immediately started the wedding ceremony by asking Edward and Sophie if they would like to marry each other. Then the promises to each other were made and Sophie actually said she’d obey Edward. Her promises however were drowned in the noise of an airplane that flew over the chapel. After the promises were made the Prince of Wales handed over the wedding rings, made of Welsh gold, to the Bishop. Edward had big problems getting the ring on Sophie’s finger and Sophie put the ring on Edward’s little finger.

After the most important part of the ceremony the choir from Edinburgh, of which Prince Edward is the patron, sang a song: the bride and groom were singing also, like they did during each song which was sung. Then David Rhys-Jones, brother of the bride, read the first letter of John. The Dean of Windsor held the prayers. After another choir-song the bishop of Norwich spoke out the blessings about a happy marriage until death do them part (hopefully). Everybody arose during a hymn and the bride and groom left the chapel to sign the registers, followed by the Bishop and their parents and witnesses. Two more songs were sung, during the second everybody came back, except for the bride and groom who came back after the songs. Everybody had to arise again for the national anthem ‘God save the Queen’. After some bows for the Queen bride and groom left and were cheered by the people outside when they came out of the chapel.

In front of the chapel two black-cream carriages, actually the Queen’s royal Ascot landaus, pulled each by four white horses were standing. Bride and groom stepped in the first one and the bridesmaids and pages in the second one. Two cars followed them with the parents inside. The postillions were in semi-state uniform. They made a short ride through the decorated and crowded streets of Windsor village. Then they rode through the York and Lancaster gate back to Windsor Castle to enjoy the reception with self-service buffet. There were five serving areas, so no long queues for the food were expected. 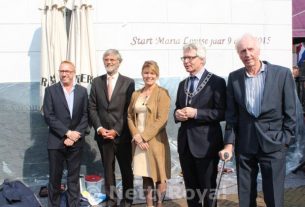 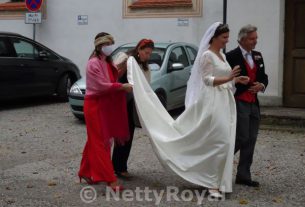 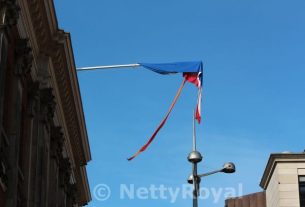