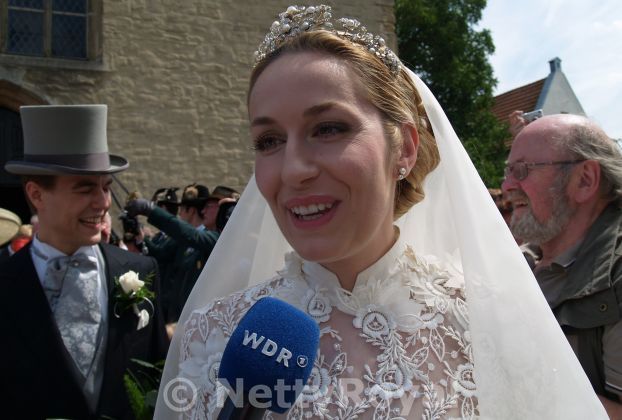 Often you wished you could come closer to a bride. Back in July 2007 it wasn’t too difficult, but I almost felt too close. I had travelled to Burgsteinfurt, Germany, for the wedding of Hereditary Prince Carl Ferdinand zu Bentheim und Steinfurt and Elna-Margret Rinn on 21 July 2007. When you were early you could stand next to the red carpet. There were quite a few people by the time the bride arrived at church, but by the time they got out there were even more. It was hard to see and photograph anything. I remember standing on my toes, hanging in the back all over my other colleagues with the camera above my head to take pictures of them getting out of the church. I had no choice. Surprisingly they were even rather good.

Then of course I tried to make way for the bride and groom who were going for a carriage ride. But that was almost impossible. Despite some security people trying to make everyone step back, they just managed to make enough space for the bridal couple. And while I tried to step back as far as possible, people from behind tried to push me forward. I nearly ended up in the carriage myself to be honest. In between I managed to take a few photos of the bride and groom walking to the carriage, including this close-up of the bride who was interviewed by the regional tv-channel. I can only tell you I didn’t even have to zoom in to take it, as I was so close to her that I almost feared I’d push the camera in her face. The local newspaper later published some photos of the carriage with me standing just behind it.

One thought on “Wedding memories (2) – Close-up of a bride”