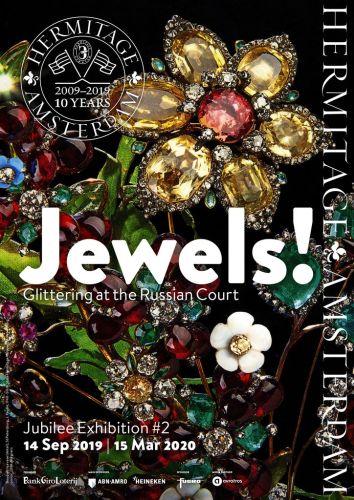 There is not an exhibition I am looking forward to more than the jubilee exhibition #2 of the Hermitage Amsterdam on the occasion of its 10th anniversary. From 14 September 2019 to 15 March 2020 “Jewels! Glittering at the Russian Court” will be on display. At the moment – until 25 August 2019 – one can still see the first jubilee exhibition showing magnificent pieces of art from the State Hermitage in Saint Petersburg. As I am more interested in royalty and nobility the second exhibition more appeals to my imagination.

Over these ten years of the existence of the Hermitage Amsterdam I have seen several exhibitions, at least the ones connected to my area of interest:

Although a ticket is 18 Euro (2,50 Euro if you have a Museumkaart like me), I always find the exhibitions are worth the money. The collections of the State Hermitage in Saint Petersburg must be amazing, and as I have never been there, it feels great to see at least some of the splendour in Amsterdam, much closer to home.

The new “Jewels!” exhibition will show tens of thousands of precious gems and their secrets. Jewels and accessoires will be on display together with costumes and portraits. The exhibition will give a fascinating impression of over two centuries of fashion and jewellery. Over 300 pieces of jewels, including personal belongings of Tsarinas, from the State Hermitage will come to Amsterdam. Not only Romanov jewels, but also jewellery from noble Russian families will be shown. Among them are masterpieces by Cartier, Lalique, Tiffany and Fabergé. The press announcement speaks of a “bewitching ball room”, created by designer Carlo Wijnands.

While the transport of the jewels from Saint Petersburg to Amsterdam is being prepared, the Hermitage invited three well known Dutch designers to visit the Winter Palace in Saint Petersburg and have a look behind the scenes. Curators and conservators showed them around in the treasuries, deposits and conservation ateliers of the Hermitage. These three designers picked their favourite jewel and will tell about their choice in the audiotour for the coming exhibition.