Some new exhibitions in the Southwest of the Netherlands made me go on another trip this weekend. The first exhibition I visited was opened by Queen Máxima of the Netherlands on 18 February 2017. At the Dordrechts Museum in Dordrecht she opened the exhibition: Koninklijk Paradijs – Aert Schouman en de verbeelding van de natuur (Royal Paradise – Aert Schouman and the imagination of nature). I was not quite sure whether it was something for me, but the photos of Queen Máxima looked lovely and at least on display are a few royal wall-hangings. However I must admit that I really loved the exhibition and could have spend hours watching all these portraits of animals, especially birds. With  the exhibition showing work from museums and private collections the museum celebrates its 175-year jubilee. Visitors are welcome from 19 February to 17 September 2017. I heard that part of the smaller work will be changed halfway the exhibition, as there is simply so much they want to show.

Aert Schouman (1710-1792) was a versatile artist from Dordrecht. He was the very best painter of animals of his time. He also engraved glass, created prints, collected and dealed in art, painted portraits, sketches, etchings and mezzotings, tapestries, wall-hangings, fans, snuffboxes and even glass windows, and also taught children how to draw and paint.

The highlight of the exhibition is the complete wall-hanging ordered by Stadtholder Willem V in 1786, which shows his special animal collection. They were meant to hang in a cabinet in the new wing of the old Stadtholder Quarters in The Hague and were ready in 1788. In 1795 Willem V and his family fled for the French. The wall-hangings were taken to Palace Huis ten Bosch, in a chest, only to be rediscovered in 1975. After restoration they were decorating the walls of the ‘black dining room’. Now the palace is being restored, also the wall-hangings were restored again. They will decorated the walls of the palace that will be the new residence of King Willem-Alexander and Queen Máxima and their daughters.  The five wall-hangings are decorated with the most beautiful birds and animals of the princely menagerie.

The menagerie of Stadtholder Willem V at the Kleine Loo near Voorburg was rather famous at the time. It was a kind of zoo with a big variety of exotic animals and birds from all over the world. Willem V even owned an orang-utan. When they died they were mounted so they could be preserved. Since 1771 Arnout Vosmaer was the director of the menagerie. Schouman delivered quite a few pictures for Vosmaers publications about animals.

The exhibition however also shows these lovely wall-hangings from the Château de Chenonceau in France, from 1767. And two more from the House in Oostkapelle from 1766. I also loved a huge series of watercolours and gouaches from important houses like Zuidwind in ‘s-Gravenzande and Patijnenburg in Naaldwijk.

I heard they’re working on it in the museum itself to make it more international. But there was nothing yet in English or any other language about this exhibition, which I really found a pity – of course it also takes me more time to translate things for this blog (and I hope I am doing fine). Of course there also is a catalogue, but again in Dutch only. 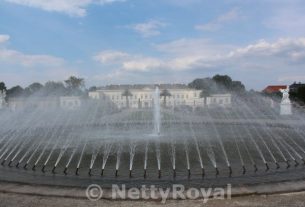 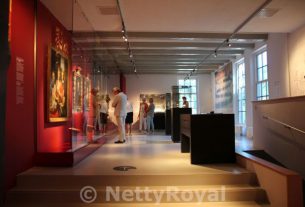 The Princessehof of Maria Louise (2) 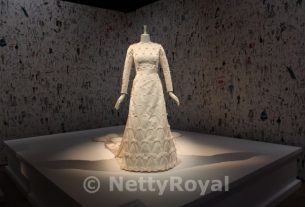 The wedding dress of Princess Mabel