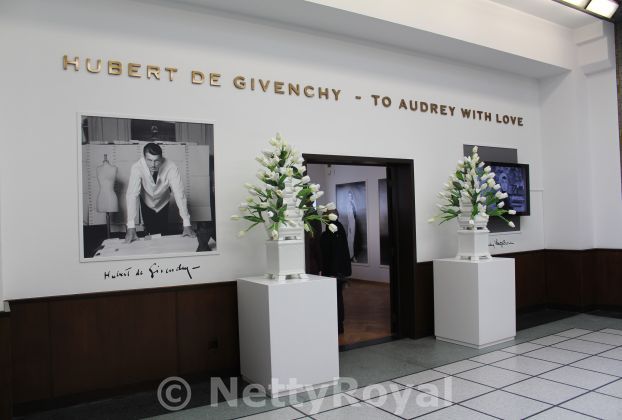 A real noble and royal surprise this exhibition “Hubert de Givenchy – To Audrey with Love” at the Gemeentemuseum in The Hague, The Netherlands. By appearance quite similar to the exhibition about Dutch Fashion just over a year ago, this one is totally dedicated to the famous French couturier Hubert de Givenchy (* 1927) and his muse, the actress Audrey Hepburn (1929-1993), who shared a unique friendship and professional collaboration starting in 1953 and lasting until her death in 1993. Audrey Hepburn once said herself: “Givenchy’s clothes are the only ones I feel myself in. He is more than a designer, he is a creator of personality.”

In some of her most famous films (like How to steal a Million, Breakfast at Tiffany’s) Audrey Hepburn wore creations by Givenchy, but also in daily life she prefered to wear his designs, even at her weddings and the christening of her  eldest son. The exhibition includes some of her Givenchy dresses, design sketches, drawings, photographs, film stills, magazine covers. And not to forget photos from the last five years of her life, when Audrey Hepburn was a Goodwill Ambassador for UNICEF.

Audrey Kathleen Ruston was born on 4 May 1929 in Ixelles, Belgium, as daughter of the Brit Joseph Victor Anthony Ruston and the Dutch aristocrate Ella Baroness van Heemstra, and had an international upbringing. She married 1954-1968 actor Mel Ferrer and 1969-1982 Andrea Dotti. From both marriages she had a son. As of 1980 her partner was Robert Wolders. She died on 20 January 1993 in Switzerland. Some of her best known films: Roman Holiday, Sabrina, Charade, My Fair Lady. She is one of the few people who has won Academy, Emmy, Grammy and Tony Awards.

To me it was a huge surprise to recognise several names of people who have loaned their Givenchy dresses to the exhibition, or in other cases probably their descendants or relatives did. Mrs Martínez-Bordiú, the Duchess of Cadaval, Baroness Fiona Thyssen-Bornemisza, Countess de Borchgrave, just to name a few. Apart from that for me some highlights were two pieces of clothing of Jacqueline Kennedy, several dresses of Princess Grace of Monaco and two dresses of the Duchess of Windsor (Wallis Simpson), including the black suit worn at the funeral of her husband, the former King Edward VIII of Great Britain.

Interesting for anyone interested in fashion, celebs and royals. The exhibition can be seen at the Gemeentemuseum in The Hague (closed on 11 February 2017) from 26 November 2016 to 26 March 2017. The museum shops sells an illustrated book in Dutch and English about the exhibition and a children’s art book by Philip Hopman.

Once a Royal Castle – Beverweerd