I was asked whether I’d like to promote this nice sounding US-documentary. I have seen the screener for part 1 only, not yet the final version. But it has nice footage and takes a look at the engagement, the life and work of the late Diana Princess of Wales, Prince Harry continuing her work, the media attention, Harry and Meghans pre-engagement life, their relationship, their interests, fashion, the wedding dress, guests (guess recorded before some stuff was announced), position, how Meghan could make a difference for the British royal family and even some British royal history. Quite a bit of different themes also, that makes it nice to watch even when there is of course some known footage. But I have also seen footage that was new, at least to me. I know there are many Harry & Meghan fans around, that are looking forward to the wedding, so here you go.

Find out the real story behind Prince Harry and Meghan Markle and their Royal Wedding when Vision Films presents, 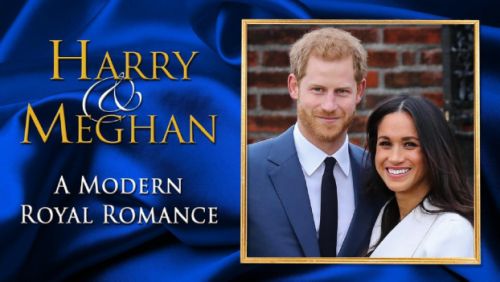 Vision Films has created, Harry and Meghan: A Modern Royal Romance, a two-part documentary that celebrates the loving union of Prince Harry and Meghan Markle in anticipation of their upcoming fairytale royal wedding. As the once bad boy of the royal family and his American actress bride-to-be continue to make headlines around the world, we take an insiders look at their whirlwind romance and what it means for the future of the British Monarchy.

Meet the newest royal couple Prince Harry and Meghan Markle as we follow the story from the beginning of their unconventional romance to engagement and discover how an American actress will become a member of the British Royal family.

Managing Director/ CEO of Vision Films , Lise Romanoff says “The whole world has been watching the romance between Prince Harry and Meghan Markle unfold and waiting with bated breath for their wedding. We are so excited to present Harry and Meghan: A Modern Royal Romance and honored to be taking part in the build up to their fairytale wedding!”

Directed and produced by

Now available on Digital, Part 1: The Romance chronicles the courtship between the Prince and Markle and their journey to the aisle. While on May 31, 2018, Part 2: The Wedding will be released and will give royal watchers an insider’s guide to the event of the year as if they were actually there on the special day. Both will be available for a SRP $3.99 – $4.99 Rent or $5.99-$7.99 Buy across all platforms.

One thought on “Documentary – Harry & Meghan: A Modern Royal Romance”

The Luxembourg Royals on the internet