NettyRoyal
Leave a Comment on Marijke Muoi – Revolution in Friesland

1795, Leeuwarden, Province of Friesland, in the north of the Netherlands. The Orange-Nassau family has fled the country, the French troops have reached Friesland in February 1795. With the French as an example the patriots finally wanted to get rid of the Orange-Nassaus and the nobility. Politics were more important than ever in this period. Elections took place on 10 April 1795, and to the disappointment of many political groups many of them were not represented in the new municipality council.

The monument of the Nassaus in the Grote- or Jacobijnerchurch was destroyed on 1 August 1795. On 16 August 1795 a crowd of revolutionaries broke into the family vault, where 18 family members had been buried between 1588 and 1765. Coffins were destroyed, the story goes that people played football with the skulls, and peed over the bones. Afterwards the bones were collected and thrown back into the vault.

Only in 1842, on request of King Willem II, the vault was opened again, water removed, and the remains of the family members placed in two more or less still intact coffins. In 1878 the widow of Baron van Heemstra let the Dutch government know, that she was in the possession of the skull of Princess Maria Louise. Her husband had been given the skull in 1830. The skull was afterwards placed in the vault, which curiously enough since contains two skulls, both supposedly belong to Maria Louise “Marijke Muoi”, the last to be buried in the vault in 1765. That is in short the history that forms the base of this most interesting theatre play “Marijke Muoi. Revolutie yn Fryslân” (Aunt Marijke. Revolution in Friesland). I was so lucky to be able to have a look already on Saturday 27 January 2018, although the premiere was only the next day. 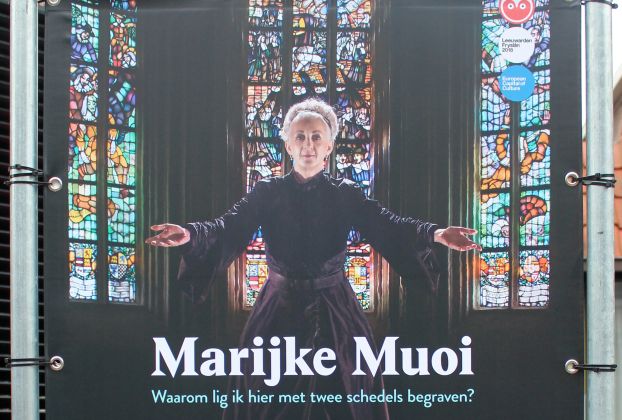 200 visitors per show will get to know one of ten historical characters, and of course Maria Louise herself, even if in 1795 she had already been death for 30 years. Each character takes his or her group into the church through one of the entrances and from his/her point of view the history of 1795 with revolution – a turning point in the history of the Province of Friesland – revives. Choose for example for Klaasje Abes Kamstra, who once took care of Maria Louise – she is the only one speaking the Frisian language during the play -, or doctor Hermanus Gonggrijp (my group), astronomer Eise Eisinga or nobleman Egbert Sjuck Gerrold Juckema van Burmania Rengers. There is even the Frenchman Joseph Richard. The main Maria Louise is played by Joke Tjalsma, but she is surrounded by a choir of ten more Maria Louises, who each guide their own group. Maria-Louises ghost has to see how her Frisians make a mess of her beloved Friesland and clearly gives her opinion about it.

The play was written by Bouke Oldenhof. The director of “Marijke Muoi” is Sjoeke-Marije Wallendal. She is specialised in experiential theatre and tries to create plays that stimulates the senses. As soon as we were led inside the church, I did experience what experiential theatre means. A bit scary, as I am night-blind – to go inside in the dark. But as you can touch others, it is fine, and soon the darkness is gone. In the middle of the church is a huge ball swinging from the right to the left and back above a platform all the time. Even for people who know the church, like me, it looks totally different now it is almost empty and the windows darkened.

Each visitor receives a headphone, that was a bit too big to my liking, even when I don’t have a small head. But it works, and through your headphone you will be able to follow your own character, just take care that you stay with your own group. I noticed at the end some had lost theirs. Think about it beforehand which character you might like best. Each group has a different vision on the democratic revolution, from conservative to radical. The nicest thing is that if you could go and see it ten times, and choose a different character at each visit, you will experience the story in ten different ways.

At first I was a bit sceptical, but as soon as we got into the church I became more and more exciting. Not very often you will experience really being a part of the story. Being a real monarchist I was just a bit disappointed that in 1795 you apparently weren’t allowed to be one. But if you don’t mind, just experience 1795 and you notice that at one point you’d even love to storm the Nassau vault. Sometimes you’d even wish you were one of the actors yourself.

During the show that lasted for about one hour and 15 minutes the language mainly spoken is Dutch. As I said above, one person speaks Frisian, one speaks French, and furthermore I heard a bit of English, Leeuwarder dialect and I even heard a Flemish accent. Although it is nice when you can understand them all, luckily I did, I heard from other visitors that they didn’t really mind if they didn’t understand everything, and that they managed to follow everything very well. All actors speak very clear. Although the play sometimes seems to be a bit chaotic, it really adds to the general atmosphere of the story.

The play opens the European Year of Culture 2018 in Leeuwaren and will be performed 60 times from 28 January to 17 March 2018. Several try outs were being held before. Tickets cost € 19,50. If you’re interested, don’t hesitate long as tickets do sell pretty well. The play is not accessible for wheelchair users, and not for people who are not very mobile. If you are able to walk and stand you will manage, and once in a while you will be able to sit down. Don’t forget to dress warmly and comfortable, as the start is outside. Bags will be kept in a locked room and you won’t be allowed to bring them with you.