NettyRoyal
Leave a Comment on The hidden gardens of Charles V

Some months ago I read an article in a local newspaper online about the hidden gardens of the Grand Hotel Karel V in Utrecht. I totally forgot about it, until I passed the place during my latest visit to the city. I was quite curious, so I decided to have a look. The gardens were not spectacular according to me. Although the dry and warm weather of this Summer might have had something to do with that. I also skipped the lovely looking terrace – maybe a recommendation for the next time I am in Utrecht and the weather is good. But I did find something I found more interesting. 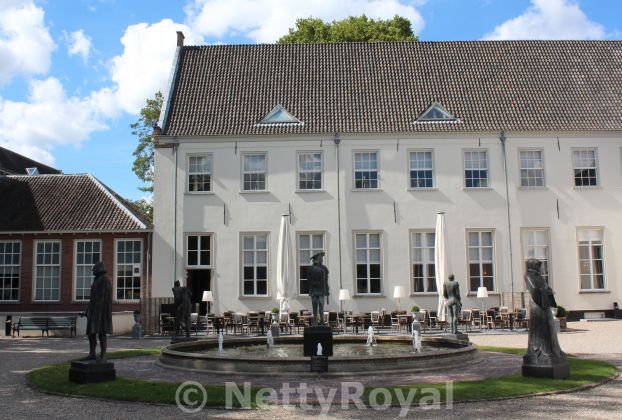 You however have to walk past the terrace into the garden to see it. I really had not expected to see this fountain with five bronze statues. In the middle of course Emperor Charles V (1500-1558) – to whom the hotel owns its name. The others are an unknown wounded soldier, King Louis Napoleon of Holland (1778-1846) – who had a palace in Utrecht -, Charles sister Queen Maria of Hungary (1505-1558) – who was the governor of the Netherlands – and Count Unico van Wassenaer Obdam (1692-1766) – commander of the Bailiwick of Utrecht of the Teutonic Order. The statues were created by the Dutch artist Ru de Vries. Unfortunately on the side guests are allowed to park their cars. That and the sun didn’t make it easy to take pictures.

The website of the Grand Hotel reveals why the hotel, with restaurant and terrace, is called Karel V (Dutch version of Charles V). The German House of the Bailliwick of Utrecht – a monastery – was constructed by the Teutonic Order in 1348. Their facilities were quite good and over the centuries high-ranked royals and nobles were received here as guests. Charles V and his sister Maria of Hungary in 1543 came to Utrecht for a meeting of the Order of the Golden Fleece at the monastery.

The House was bought by Louis Napoleon, King of Holland, in 1807. The military hospital he wanted to establish here only was realized by his successor King Willem I of the Netherlands in 1823. The building remained a military hospital until 1990. Renovation work started in 1992 and now the building is a national monument. Throughout the hotel one can find traces of the past, like archaelogical findings, photographs and drawings. In the Restaurant Karel 5 one can admire a mantelpiece with the coat of arms of Charles V. It sound like I really should go back again, although the hotel itself seems to be a bit too expensive for me.

The Liechtenstein vault in Vaduz