NettyRoyal
1 Comment on The Oranjewoud estate – An oasis of peace

Last weekend my parents took me to a place I hadn’t been anymore for nearly 30 years, but which we visited several times when I was a child. A place with a royal history.

We have to go back to the year 1676 when Albertine Agnes – daughter of Frederik Prince of Orange and his wife Countess Amalia zu Solms-Braunfels – bought herself the existing estate called Sickingestate in the Province of Friesland, near a nowadays rather big village called Heerenveen. She paid 41,000 Carolusguldens for it and called her summer residence “Op ‘t Woud”. She had gardens, water, paths and an orangery built.

Albertine Agnes died on the estate in 1696 and left it to her recently widowed daughter-in-law Henriëtte Amalia. Around 1708 the French architect Daniel Marot designed the Oranjewoud estate in classical baroque style, but in the end only two wings were realised. Also a huge formal garden was developed, of which the base is still visible today. The Stadtholders visited the estate regularly until 1747. The last regular residence was Maria-Louise, wife of Stadtholder Johan Willem Friso.

When the French conquered the Netherlands the estate was confiscated. The wings were demolished in 1803 and 1805. The estate fell apart in three parts. Several important families took up residence in Oranjewoud and took the opportunity to buy parts of the estate. Hans Willem de Blocq van Scheltinga built House Oranjewoud on the fundations of the old palace. Pieter Cats had Oranjestein built and Siebe Tuijmelaar had his estate called “De Kom” built. The last one was demolished, however the other two still exist.

In 1823 Hans Willem de Blocq van Scheltinga, the grietman (kind of mayor, judge) of Schoterlandt, bought the area of the former palace and in 1834 had a new estate built on the foundations of the old palace. The former royal park is developed into an English landscape garden. It is not clear who designed it. Landgoed Oranjewoud was in 1864 inherited by his son Hans Willem jr, who lived there with his wife and two daughters. In 1906 the youngest daughter Maria, married to Count Charles Louis Andrien Juste van Limburg Stirum, inherits the property from her father. They had the estate modernised.

In 1942 jonkheer Martinus de Blocq van Scheltinga, the eldest son of Marias cousin jonkheer Hans Willem de Blocq van Scheltinga, inherits the estate. He however sold it for financial reasons in 1953 in two parts. The Overtuin (garden) becomes public property and since is a popular public park. The building was bought by the Institute for Agricultural Cooperation, and in 1974 becomes the possession of the Friesland Bank, nowadays by the FB Oranjewoud Foundation. This is what it looks on the inside now. The house is seldomly open to the public, but is used for conferences, meetings, lunches, dinners, etc.

In 1820 the merchant Pieter Cats from Leeuwarden bought the house of the steward of the royal estate Oranjewoud. He soon had it converted into a neo-classic building and called it Oranjestein. Cats manages to buy some more of the surrounding land.and had garden architect Lucas Pieter Roodbaard design a lovely garden. Cats’ grandson Jan Bieruma Oosting, and his son Johan Bieruma Oosting, had the house converted and enlarged again. Since little change has been made. Nowadays the family De Beaufort van Sminia owns the house and lives in it during the summer. If you’re lucky the garden and tea garden are open, especially on Sundays in the summer. 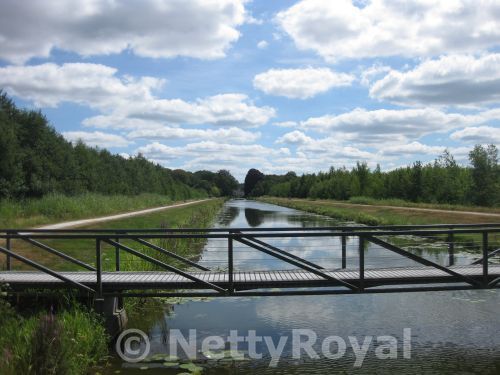 Who loves to cycle and walk will love walking around the Oranjewoud area. In the newest part of the estate one can find – since its opening by Queen Beatrix in 2004 – the Museum Belvédère, designed by architect Eerde Schippers, who built his own modern house nearby. The museum displays modern art.

One thought on “The Oranjewoud estate – An oasis of peace”

The New Tableware of the Dutch Royal House

An engagement in Luxembourg – Wedding date