It always surprises me that when the retirement age of normal working people is being discussed, people don’t know how loud to protest when a government decides the age goes up. That happened in the Netherlands for example recently. It varies per country, but in the Netherlands where I live, for many years it was pretty normal to retire at 65, or even earlier. In recent years it was decided the retirement age should go up, and when I am ready to retire, I might well be over 70.

But when it comes to royals retiring, it is a totally different story. But why should royals be different? I’ve hardly read complaints about the Duke of Edinburgh finally retiring, but well, he is 96 years old by now and doesn’t receive his own personal apanage. And I think after having served his country for so many years, he deserves a few last years without having to work hard. Not many people his age are still working, or even alive. In the past royals gradually reduced their working load when they got older, nowadays it seems to be necessary to announce retirements officially. 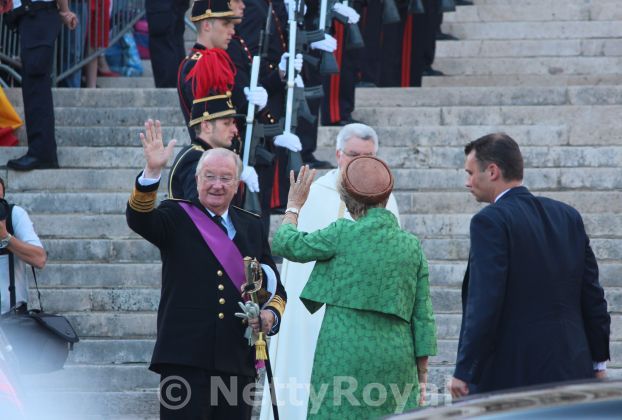 When King Albert II and Queen Paola of the Belgians stepped down in July 2013 it was a totally different story. Every time the word apanage is being mentioned since, people complain that the former royal couple receives so much money. As a king Albert received money from the civil list, which included money to pay for staff, maintenance of the palaces and furniture, the costs of activities, administration, household, transport, etc. No taxes were paid over this amount of money either. Apanages were received by Queen Fabiola (until her death in 2014) and the King’s children Prince Philippe, Princess Astrid and Prince Laurent.

That of course changed in 2013. The civil list is now Philippe’s, and in 2017 he receives 11.786.ooo Euro. Astrid and Laurent still receive their apanages, in 2017 321.000 Euro for Astrid, 308.000 Euro for Laurent. Retired King Albert II receives 924.000 Euro in 2017. People are not very happy with the fact that Astrid and Laurent receive apanages, but in the late 1990s it was decided they would receive one, and I don’t think that decision should be changed, even when I think they should never have received one in the first place. They have to report now every year though how they spent their money and how many engagements they have undertaken. The apanage could be reduced when politicians are not satisfied.

Although Albert wasn’t happy with the reduction of his apanage (until 2013 his sister-in-law Fabiola received over 1,4 Million Euro), he had to be satisfied with this government decision. Lots of people and politicians complain that he does too little work for the money he receives nowadays. One might forget that both Albert and his wife Paola have had some health problems in the past years and are by now 83 and almost 80 years old. I don’t expect people of that age to show up weekly for engagements, although I would say an appearance at important events like national day and some commemorations would be desirable. They’ve done their job for many years, first as heirs to the throne, later as royal couple. Most Belgians their age surely don’t work anymore.

Also 83-year-old Prince Henrik of Denmark retired rather unexpectedly on 1 January 2016. As we know now he is having problems walking and still undertakes engagements occasionally. He has served Denmark tirelessly for more than 40 years. Also he is at an age that normal people in many Western countries don’t work anymore. Still the Danish media complained about his luxury retirement money. He will still receive his 8 million Crowns (1,6 Million Euro) apanage.

Some complaints also in the Netherlands, where Princess Beatrix of the Netherlands in 2016 still received 1.464.000 Million Euro. Despite being 79, she still undertakes engagements, however she seems to have reduced them in recent years.

3 thoughts on “Elderly Royals at Work”

Looking back at 2019 in genealogical facts

The other Royal Prisoners of Saint Helena

The Queen is dead, long live the Queen!