On 9 and 10 May Charles, The Prince of Wales, and Camilla, The Duchess of Cornwall were in München (Munich), Germany.

My friend Gabi decided to have a look and arrived at the Residenz – where once the Dukes and Kings of Bavaria resided – around noon. However the couple was a bit late. They were thought to arrive at 1.30pm, but they only landed at the airport around 2pm and it was not until 2.45pm until they actually arrived. While Gabi saw Prince Charles from quite nearby, she hardly saw anything of Camilla. She hoped that the couple would come out at the same place, but no, they unfortunately took another way out of the building. Gabi then went to Siemens where she caught another glimpse of Prince Charles.

In the evening the Prince and the Duchess attended a dinner at the Residenz. While again, Gabi didn’t see them, as they were driven by car to the inner courtyard, she did see other interesting guests. Arriving were the Duke of Bavaria, Count Ignaz and Countess Robinia von Toerring-Jettenbach, Prince Andreas and Prince Hubertus von Sachsen-Coburg und Gotha, as well as several other German celebs. 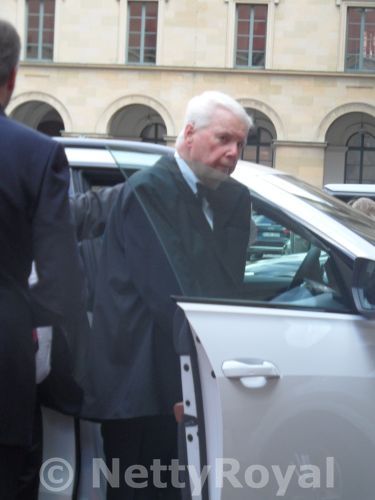 The mystery of the 3rd Duchess of Sevilla