Just came back from another very successfull royalty weekend at Ticehurst, Great Britain. Interesting lectures, good company and food. Like here the countryside of East Sussex is far behind. Unlike last year it was cold, even freezing a bit at night, and hardly any flowers were blooming. Bought myself a few books only, and even afterwards my luggage was not too heavy.

Back to London on Sunday evening, and some hours on Monday left to do something, including of course some shopping for books. The day turned out to become a bit more exciting than we had thought. A friend and I decided to visit Kensington Palace. For both of us it had been some years since we’d been there. Quite high entrance price though, especially as the part that you can visit is not really very big.

The exibition Victoria Revealed turned out to be quite nice. Interesting items, paintings and even some clothing.

We knew the Duke of Gloucester had an appointment near St James’s Palace, and we managed to find out when he would arrive. Thank you, Joe! Gladly we were in time, as the Duke arrived about ten minutes early. We started taking photos and to our surprised he walked straight towards us. Turned out my contact, who had been given the information about the time by Buckingham Palace, had told them it was for some friends of him from The Netherlands. “Hi, are you the people from Holland?”, the Duke asked. Well my friend was not from The Netherlands, but from Denmark, where the Duke’s wife originally is from. We had a nice little chat before the Duke went inside, and were able to make some more pictures.

Before I had to leave for the airport, we decided to have something to eat. A Norwegian friend in the meantime had joined us. We found a pub, ordered food, and when having a look at the TV-screen, I saw Baroness Thatcher, the former British prime minister, had died. There was something going on at Arlington Street just behind The Ritz Hotel. And of course we couldn’t resist having a look there. Not much to see, but there was lots of media around. Only this morning at home I discovered she had actually died in the hotel itself.

I however could only stay for a very short time, and took the underground back to the hotel, collected my luggage, and found my way to Heathrow Airport. Arrived home shortly before midnight. Tired, but had a very nice long weekend.

Buckingham Palace announced yesterday: “The Queen was sad to hear the news of the death of Baroness Thatcher. Her Majesty will be sending a private message of sympathy to the family.” Today it was announced that both the Queen and the Duke of Edinburgh will attend the funeral service at St Paul’s Cathedral on 17 April. 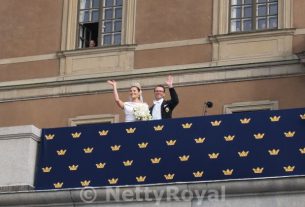 The wedding of Victoria & Daniel – They said yes!

The wedding of Ari Behn and Princess Märtha Louise of Norway