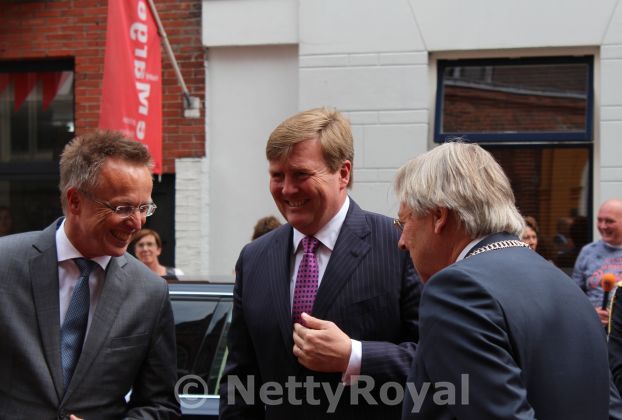 Lots of royal visitors for the Province of Groningen lately. King’s Day, Princess Laurentien at Children’s Council meeting and on 25 May King Willem-Alexander of the Netherlands opened the exhibition “Avant-garde in Groningen. De Ploeg 1918-1928” at the Groninger Museum in the city of Groningen. After the state visit to Luxembourg, that ended in the early afternoon, he didn’t even have time to go back home and flew straight to Groningen. In his car he arrived from Groningen Airport at the Der Aa-Church in the city centre just after 3pm.

Surprisingly the King didn’t even look tired after the almost three-day state visit and looked like he really was looking forward to the opening ceremony and the exhibition. In almost one hour there were performances of singer Shirma and no less than three speeches by the director of the Groninger Museum Andreas Blühm, the curator of the exhibition Mariëtta Janssen and the president of the Foundation 100 Years De Ploeg Deddo Houwen. In the audiences I discovered some well-known people from Groningen including like singers Arnold Veeman (who performed at King’s Day) and Ellen ten Damme, painter Henk Helmantel, artist Maya Wildeboer and former King’s Commissioner in Groningen Max van den Berg. I was allowed inside, but not allowed to take photos there, nor in the museum afterwards.

While the ceremony started with the song “Freedom” by George Michael, sung by Shirma with the USVA Groninger Students Choir Mira, Pop Choir Estrellas and the Groninger Student Choir, it ended with “Think” by Aretha Franklin. I wasn’t the only one who enjoyed the music, as I did see King Willem-Alexander swinging, clapping and even singing too. He also was given the catalogue of the exhibition before leaving the church.

It was a short ride to the museum. The few people from the media were hurried into a waiting bus, while the king got into a minibus and was followed by a few cars. We were supposed to drive in front of the royal car/bus, but that didn’t happen. Luckily when we arrived at the museum the king seems to have waited. So when I quickly hurried out of the bus I just manage to take position before the King, the museum director Andreas Blühm and some others actually walked to the museum. They stayed outside for a while to listen to the pop choir again, before finally entering the building. The other guests by the way walked from the church to the museum passing several choirs on the way.

After a visit to the exhibition of about 45 minutes the King finally could continue his way back home.

What is De Ploeg?

As I have been in the museum before I have seen their De Ploeg collection. Not really my taste, but I can see why others like it. It was nice though to hear some people talking about this very Groninger artists’ collective with passion during the opening: non conformist, colourful, freedom (hence the choice for the songs above), special … The De Ploeg Year 2018 has already started throughout the whole province with all kind of small and bigger activities like exhibitions, concerts, theatre, a symposium, interaction with school children.

In 1918 the Pictura in Groningen exhibited work of local artists. A group of young artists was excluded and some of them were rather disappointed. They decided it was time to abandon the ideals of the 19th century and on 5 June 1918 founded the artists’ collective De Ploeg (The Plough), as they thought there was little to do in Groningen when it came to art. They wanted to get rid of old traditions and were inspired by painters like Vincent van Gogh. De Ploeg included artists as Jan Wiegers, Jan Altink, Johan Dijkstra … When in 1920-1921 Jan Wiegers was treated for lung disease in Davos, Switzerland, he met the German expressionist Ernst Ludwig Kirchner, who made a deep impression on him. Back in Groningen Wiegers introduced the expressionism in Groningen. The others in De Ploeg were enthusiastic and in the years to come their work showed bright coloured landscapes, dynamic city scenes and distinctive portraits.

This jubilee is now celebrated with this exhibition at the Groninger Museum with more than 250 works of art, not only from the museum itself, but also on loan from other museums and private collectors.  It also features work by Vincent van Gogh and Ernst Ludwig Kirchner and traditionalists like Jozef Israëls, H.W. Mesdag and Otto Eerelman, who until De Ploeg had dominated the world of art in Groningen. The exhibition is open until 4 November 2018. 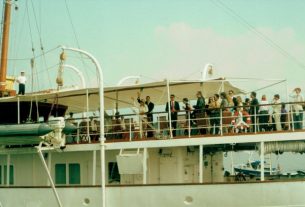 My memories – The wedding of Haakon & Mette-Marit