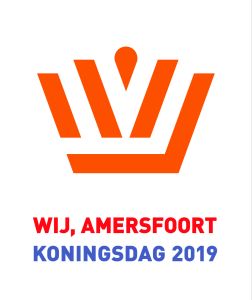 No Koningsdag (King’s Day) for me this year, unlike 2018 when they visited my home town of Groningen. I will watch TV this year. However I did visit Amersfoort on the last day of March to have a look at the route of the royal family. I was accompanied by a long time friend from Amersfoort, who is very excited that the family finally visits his city this year.

The route is there, the programme is there, Amersfoort is totally ready for the big day. On the official website, on Instagram, Twitter and Facebook one can regularly read news updates. Saturday 27 April 2019 is going to be a wonderful day and even the weather reports thus far are good. The royal visit will start at 11am, and is supposed to end at 1pm. But from previous years it is known that it can take a bit longer before the royal family has walked the 1,075 metres long route.

It is expected King Willem-Alexander and Queen Máxima of the Netherlands will bring their three daughters Princess Amalia, Princess Alexia and Princess Ariane again. Although not announced yet, I expect Prince Maurits and Princess Marilène, Prince Bernhard and Princess Annette, Prince Pieter-Christiaan and Princess Anita, Prince Floris and Princess Aimée will also be there as usual. King’s Day is one of the rare occasions these four royal couples appear in public.

The route can be seen on the website of Koningdag Amersfoort. The royal family will start the day at the Mariënhof, where mayor Lucas Bolsius will greet his guests. Here a photo will be taken of the King and the Queen with the storytellers that will guide them throughout their visit. They represent the city and region and tell the story of WIJ, AMERSFOORT (We, Amersfoort). After the festive opening the storytellers will go to their places along the route. Singer Jermain van der Bogt (Wudstik) and children of five primary schools will sing the song “Mooi” (beautiful), together with three choirs.

Around the corner, at the Zuidsingel, there are two spots with activities. All kind of people, from young to old, from all kind of nationalities will present themselves. A bit further along the route there is lots of music, and the Dutch painter Mondriaan (who was born in a house nearby) and his famous painting Victory Boogie Woogie are remembered.

While they will pass a few shops, the royals will see the event “Recycle yourself” at the Varkensmarkt, as sustainability is an important theme for the city. In the Krankeledenstraat that is only open for a selected audience, the CliniClowns, with main office in Amersfoort, and puppet-master Leo Petersen will show theatre. At the foot of the Lange Jan (Onze-Lieve-Vrouwetoren) – the heart of the Netherlands – and the square the theme is “lieve vrouwen” (Our Ladies), and taking care of each other and religion. There is lots of music and the royal family will meet women from Amersfoort of all ages. They contribute to the community and are the symbol of all women in the area that deserve respect for what they do. The clocks of the tower will ring.

At the Westsingel the route continues. There they will  be greeted with a serenade from the balcony of the white house by the Holland Opera. Near the Stadhuisplein there will be art, while at the square itself talent, innovation and sports is the main team. (Female) football, dance, freerunning, basketball … let’s see if the royal family will participate. A little bit further there will be a quiz between teams of the region, in which you will learn about all nine municipalities in the area. The question is: what do the royals themselves know?

At the Plantsoen-West will be a festival with art and culture and foodtrucks, dance … and Anna from Heel Holland Bakt (the Dutch version of The Great Bake Off) will have a cake ready. There is also lots of music. At the end the Amersfoort Zoo will present its interpretation of royal animals. No visit to Amersfoort without a look at the  famous Koppelpoort, where history will be shown. Theatre, city trumpet players, and a meeting with the statesman Johan van Oldenbarnevelt, who was beheaded 400 years ago and is remembered with a few exhibitions.

The day ends at the Eemplein with a short but wonderful final show with music from the Marcel Fisser Band, and all artists and storytellers that performed along the route. Lots of people can find a place here. The Wilhelmus (national anthem) will be played and the royal family will say goodbye.

Don’t find yourself a place at the very start of the route or on a huge square. Big chance you won’t see them for long, or only from a distance.

I have understood that on a big part of the route the fences will only be at one side of the street. The area around the Lange Jan (Onze-Lieve-Vrouwetoren) has a few nice not too broad streets where you would easily see all the royals passing.

Always be sure you’re not standing behind a press area or behind an activity. On these spots you will not be able to see much either.

This is the Platinum Pudding 2022

The royal wedding season has started!