Don’t you just love statistics? It is the big question at the end of each year in the United Kingdom and in some other monarchies too: which royal worked the hardest? With the UK as an example I have tried to calculate the engagements and public appearances of the Dutch royals in 2018, based on the emails of the RVD (Government Information Service) I received in 2018 and a few media programs that I managed to get. It however isn’t easy. When possible I divided visits into more engagements (some people might think a bit too much, but of course it was my decision), especially at state visits, so don’t be surprised there are more engagements here than in the royal calendar. 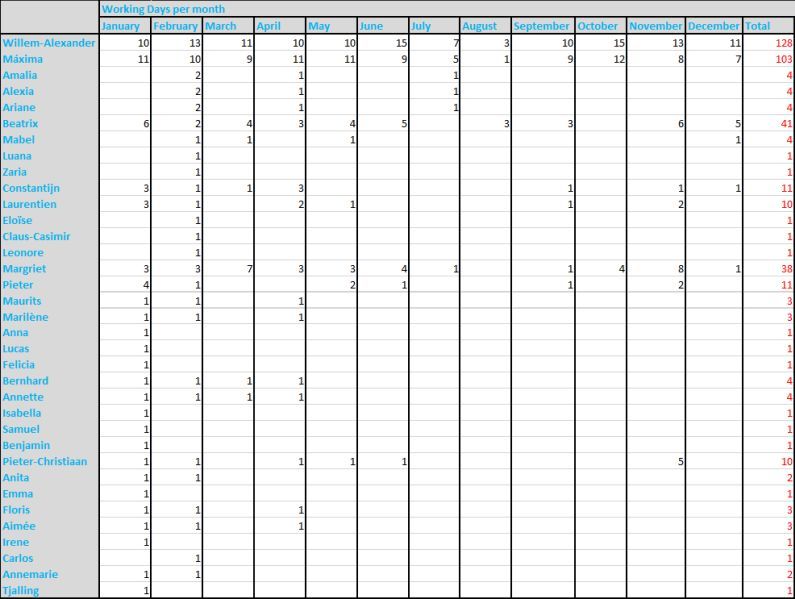 Overall it is not surprising that it is King Willem-Alexander who worked most days, followed by Queen Máxima, Princess Beatrix and Princess Margriet. One has to take into account that because of the death of her sister in June 2018 Queen Máxima missed 6 working days (including a four-day state visit) – she managed to catch up with one appointment shortly afterwards tough -, and due to illness 2 working days in November 2018 (a foreign trip to Tanzania). Most royals didn’t have more than the appearances listed above, as they actually do have a regular job. You should also take into consideration, that these statistics only show the visible working days, as certainly the royals work much more than we can see in public.

Because of the birthdays of Princess Beatrix (80) and Princess Margriet (75) we saw some more grandchildren appearing in public once this year than usual. On the other hand we can’t be 100 % sure that no other members of the royal family attended Princess Beatrix’ birthday and managed to remain unseen by photographers and fans hanging around outside of the palace where the party was held. 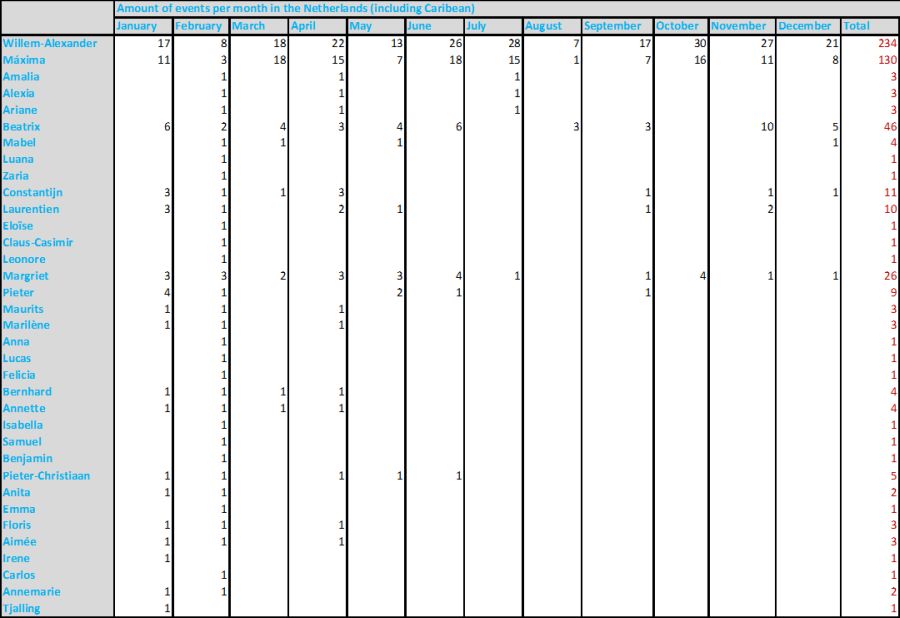 How many engagements did these royals have in the Netherlands itself (including the island overseas in the Caribbean)? Willem-Alexander easily tops the list. As king he doesn’t only have regular engagements, but also holds much more audiences, takes oaths, receives ambassadors, etc. Again he is being followed by Máxima, Beatrix and Margriet.

I added royals that weren’t announced, but attended an event that was officially made public by a press announcement. I however haven’t counted eventual appearances that weren’t officially announced by the RVD, although I counted at least two of these events for Princess Beatrix. Also Prince Constantijn, Princess Laurentien and Princess Mabel appear in public more often, but their engagements are unfortunately not always announced by the RVD.

What kind of events? 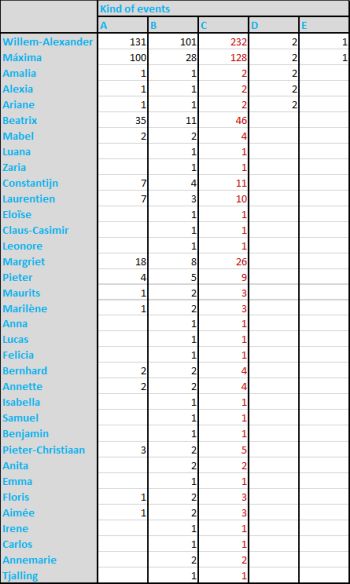 But what kind of events did the royals attend in the Netherlands? I have tried to divide them.

A Official visits, concerts, symposiums
B Other engagements, including investitures, welcomes/farewells, receptions, audiences, lunches, dinners, banquets and birthdays. Often these take place in or around the palaces
C Total of Engagements in the Netherlands (including Caribbean islands)
D Photosessions: one abroad, one in the Netherlands
E TV or Video speech recording

My next question was how many days in total did the royals spend abroad? Note I haven’t counted the one resting day of Willem-Alexander in Lithuania in June 2018, as that wasn’t a working day. While for Willem-Alexander it most of the time was rather easy to count the events at official visits and state visits abroad, that wasn’t always the case for Máxima. When she is abroad for the United Nations for example it is not always known how many engagements she has. Usually the press announcement mentions one or two main events, while for example ‘bilateral meetings’ are never specifically shown, and there could be a lot of them.

Willem-Alexander in 2018 travelled to China, Korea, Luxembourg, Belgium, Estonia, Latvia, Lithuania, Germany and the UK (London and Scotland). Máxima was in Switzerland, China, Korea, Indonesia, Luxembourg, the USA (twice), Germany, the UK and Argentina. Princess Margriet visited Korea, the USA (New York) and Haiti. On her trip to New York she was joined by her husband Pieter van Vollenhoven, while her third son Prince Pieter-Christiaan accompanied her to Haiti. As said, Máxima missed the state visits to Estonia, Latvia and Lithuania, and a two-day visit for the UN to Tanzania.

The Netherlands has twelve provinces, and furthermore there are six islands in the Caribbean. While most of the royal engagements are concentrated in Zuid-Holland (The Hague, Rotterdam) and Noord-Holland (Amsterdam), some of the other provinces were hardly visited in 2018. The further away, the less likely a royal visitor passes by it seems. I don’t think that is different in many other monarchies. Surprisingly only Princess Beatrix paid a visit to the newest province Flevoland on 14 June 2018, Willem-Alexander was in Drenthe twice, whille Limburg saw two visits by both Willem-Alexander and Máxima (not together) and also Overijssel received very few royal visits. From the Caribbean islands Curacao was visited by Willem-Alexander and Máxima in July 2018, while Beatrix travelled to Bonaire in November 2018.

For the record: I have created these statistics myself. I am not very good in creating lovely graphics myself, so the lists above are what I managed to create.

The engagement of the Prince of Orange and Máxima Zorreguieta

The Mauritshuis in The Hague

Paul and Franziska – Their wedding guests