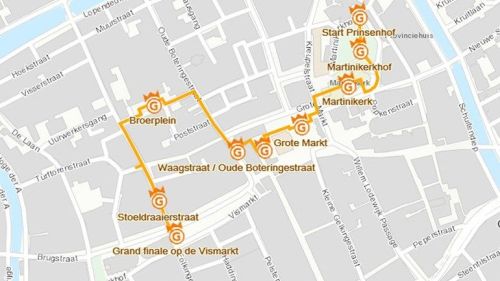 After the start of King’s Day 2018 on 27 April at the Prinsenhof in Groningen, The Netherlands, the Dutch royal family will visit the Martini Church. It’s distinctive tower is the heart of the centre of the city already for centuries. Here the royals will be met with culture and art.

Hopefully they will also have a quick look at the beautiful interior of the church. Looking at the map they will enter through what’s called the bridal door. I wonder if the royals do know that in 1659 Princess Henriëtte-Catharina of Orange-Nassau married Fürst Johann Georg II of Anhalt-Dessau in this same church. Probably the only royal wedding ever having taken place here.

The tower of the church is officially separated from the church itself, as unlike the church the tower is the property of the municipality of Groningen. At the bottom of the tower is an entrance/exit, normally used for entering the tower, so one can climb it. The 97 metres high tower has a brick spiral staircase consisting of 260 steps and a carillon with 62 bells. The passage between church and tower is seldomly used, but will be on this special occasion. The royals leave through the tower of the church, which is very unusual. At that special moment the bells of the tower will be played by the bell-ringers of the Groninger Klokkenluiders Gilde. The town-carillonneur Auke de Boer will also play.

The church and tower were named after Saint Martin of Tours. The oldest parts of the building are from the 13th century. The church was extended in the 15th and 16th century. The tower “d’Olle Grieze” (Old Grey One) in the 15th century replaced an older one that was destroyed by lightning. Originally a Catholic church, it has been a protestant church since the 16th century.

Note: Walking towards the Grote Markt, opposite of the church you’ll find the Tourist Information, that as off today sells King’s Day shirts. In case you’re interested: T-Shirts for € 12,99.