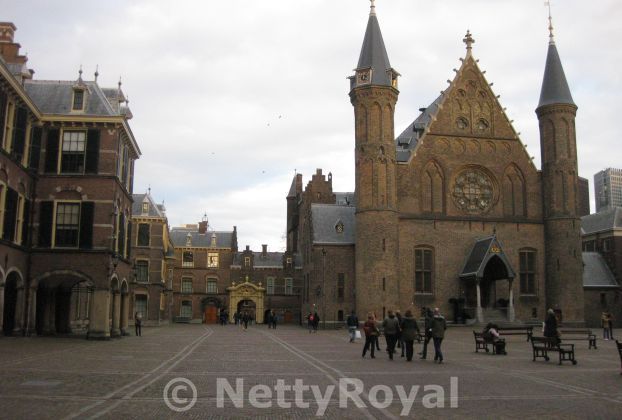 Prinsjesdag (Princes’s Day) is a centuries-old tradition and the only tradition with pomp and circumstance left in the Netherlands. Since 1904 it is held in the Ridderzaal (Hall of Knights) in The Hague. Since a long time the day is on the third Tuesday of September. It marks the beginning of a new governmental year. The estimates of the government are read by the Queen (or King) in front of the members of the government. It is broadcasted live on TV now, and some millions of people are watching, while others stand along the route to see it their selves.

It was just 8:30am when Oscar and I arrived in front of the Palace Noordeinde. There was almost nobody there yet except for some police and press. Oscar, where I finally talked to in Oranienburg after having seen him from time to time at royal events, is one of the biggest and well-known Oranje-supporters in the Netherlands. He got a phone call from the Dutch radio if he could give an interview this early in the morning, so we were in time. When Oscar was being interviewed and photographed I looked around. Nothing to see in the palace except for cleaning ladies who were on the balcony and at the front door. The flag of the Queen was waving on the roof, as was the one of Crown Prince Willem-Alexander on the roof of the house he is living in next to this Palace. We got more company during the next one and a half hour, from friends of Oscar, and met some new royalty fans. At this stage of the day reporters walked around to interview people who might be interesting. I was so lucky to stay next to Oscar and did an interview for the Haagsche Courant. Guess, I discovered late in the afternoon this reporter really used a part of the interview for a short article. Reporters from television, radio and newspapers desperately wanted to find out what we thought of Máxima Zorreguieta. We said we’d just wait to talk about it until after an engagement. We, the fans, talked with each other about the royals. Some tried to guess which colours the dresses of the Queen and her sister Princess Margriet would have this time.

It was going to become worse when suddenly a car showed up with pictures of Máxima on all sides and someone standing in it (the roof was open) filming the Palace and the crowds. Someone stepped out and shouted some nasty things through his megaphone. This was the camera team of (un) popular TV-reporters Menno Büch and Theo van Gogh. They drove away and came back some time later. From the police they had to remove the cars, but unfortunately they were allowed to stay. They got company, could it get worse, from Johan Vlemmix of the Willem-Alexander (& Emily) Fanclub, who brought with him two ugly young woman with unwashed hair in wedding dresses, who played for Máxima. One of them had the Argentinean flag around her neck. Finally it was our turn to give them an interview, happily Oscar did it and talked with them very calm and didn’t let those reporters provoke him, which was clearly their goal. No way they would reach this goal! A royalty fan came along on a gold-coloured bike, which everyone called the golden carriage also. Much happened around us anyway: footmen and military men took their place. About 12:00am the guard of honour arrived. Then we were just waiting for the big moment. Around 12:45pm the carriages left the stables and were driven to Palace Noordeinde. First some “normal” carriages arrived for some members of the royal household, and the grand master and grand-mistress of the Queen. Then the glassy berline carriage arrived to pick up the sister of the Queen, Princess Margriet (in dark blue with multi-coloured-most red-upper body), her husband Pieter van Vollenhoven and the two youngest sons of the Queen, Prince Johan Friso and Prince Constantijn. Then at last the Golden Carriage arrived pulled by eight horses. Queen Beatrix (in dark blue with silver flowers on the upper body), Prince Claus and Willem-Alexander, the Prince of Oranje, stepped in. Somewhat after 1:00pm the procession moved off. Just after the Golden Carriage had passed us some people, who are illegally in the Netherlands but try to stay here, made a protest by letting fly lots of red balloons. Unfortunately some didn’t go up, and stayed on the ground. The horses passing them reacted but happily nothing happened, although a little girl in front of us ran to the balloons and was almost hit by some horses. We were more frightened than the girl herself.

When the Queen left we were talking again. A woman of the television came to us to ask of some of us wanted to be interviewed when the Queen came back after the speech. Arno, one man standing there with us, and I were finally chosen. We were just waiting until the carriages came back and of course didn’t hear what the Queen was saying in her speech.

Big commotion, especially under the women in the hall, when the Queen started her speech. “Mijne Heeren! Het is mij aangenaam U bijeen te zien tot hervatting Uwer werkzaamheden. Op menig gebied is dringend behoefte aan krachtige wetgevende maatregelen.” (Dear Gentlemen! It is a pleasure to me to see you together for continuing your work. On several points there is an urgent need for powerful legislative measures). It appeared that this was the beginning of the speech from the throne the Queen’s Grandmother Wilhelmina spoke in 1899 when the government only existed of men. Queen Beatrix thought this would be an interesting beginning of her last speech of the millennium. Not only the Queen smiled after this strange beginning. A loud laugh-salvo went through the Ridderzaal, also from the members of the royal family. Afterwards the real speech from the throne.

At about 2:00pm the Queen and the others returned to Palace Noordeinde. Just before Arno and me had been picked up by this TV-reporter. We could see everything very well from our nice place. When the Queen and her family disappeared into the Palace, the fences were opened for the crowds who began to run to the gates of the Palace. During this the interview for the television was held. Some others were asked first and when it was finally my turn I just could say that “Yes, that’s right” that I am from Groningen. Then the show was immediately stopped as the Queen already showed up at the balcony. To my surprise they stood there for quite a while waving and listening to the elated crowds below them. Only Prince Johan Friso, of who everyone knows he is not that fond of this kind of official events, looked as if he loved more to be inside. I made some (hopefully nice) photos.

The balcony-scene was finished and Prinsjesdag was over. We gathered in front of the house of Prince Willem-Alexander and left to drink tea/coffee at a pub called Juliana’s. We talked about the past few hours and watched the vacation photos of Oranienburg both Oscar and I had brought with us. When almost everybody had left, Oscar, Johan (the other man I met in Oranienburg) and I visited the royal bookshop near Palace Noordeinde. At the end of an interesting day we and another friend of Oscar and Johan had a nice dinner in a restaurant. Then I had to leave The Hague to go home, where I arrived after a long train travel of about three and a half hour, very tired but happy I asked for a day off at school.