NettyRoyal
1 Comment on Should Queen Rania have attacked a blog?

The year 2019 hasn’t started to well for a few fellow bloggers that I value very much for their hard work to identify designers for the clothing of many royals. UFO No More is a great blog, their post “How Much Is It Worth?” for 2018 however highly criticized and this time not only by royalty watchers. Their post from 1 January 2019 already said that Queen Rania of Jordan wasn’t on the 2018 list after discussions with the Royal Hashemite court and the Office of Her Majesty. On 2 January 2019 Rania herself (!) had a statement issued, even mentioning the name of the blog, in which it among others said:

“The ‘UFO No More’ estimates of Her Majesty’s spending on clothing were circulated. In view of their assessments that is far from reality and truth, we have asked their sponsors not to include Her Majesty in the annual reports of their blog.”

The statement continues that criticizing the spending and the focus on clothing of wifes of heads of state, and the accusations of wastefulness, are not new. These issues have been exploited as a “historical political tool” and it says:

“Today, we see some in Jordan adopting this approach to portray Her Majesty the Queen as far from reality, far from the truth. So they may reject this clarification and question it in principle in an effort to build a false public opinion. We realise that this explanation may be out of the ordinary, but in the absence of facts, rumours and false information are spreading and the wrong impressions accumulate, so we put these details in your hands.”

It is clarified that most of Rania’s clothes are either offered as gifts by fashion houses or borrowed, or purchased at reduced special prices.

“Some may deplore the principle of ‘borrowing clothes,’ but it is a universally accepted practice among fashion houses as a way to highlight their designs.”

It also says that the court doesn’t advertise or promotes fashion on the website or social networking platforms of the Queen, unless the designs are Jordanian.

Early 2018 Rania ranked first among 11 female royals on UFO No More, with an estimated worth of her wardrobe (identified pieces) of more than €267,000 in 2017, with an average price of more than €1,700 for 191 new identified pieces. While I can understand that the Queen’s office is not happy with the list, the blog has also always stated clearly that they use the market value for clothing being worn by all of these royals and DON’T know whether the clothing and accessoires are borrowed, gifted or purchased at reduced prices. It is rather the media that makes use of these posts that give the impression that the royals actually did spend all this money themselves on clothing. See for example the Daily Mail and Daily Mirror, newspapers that were more than happy reporting that this year’s list mentioned Meghan, The Duchess of Sussex, on top – the biggest amount of money being spent on a few expensive jewels, that were possibly a wedding gift (but we can’t know for sure as it isn’t confirmed). Her ranking is not that surprising given the fact that she is a new royal that needs to put a royal wardrobe together. 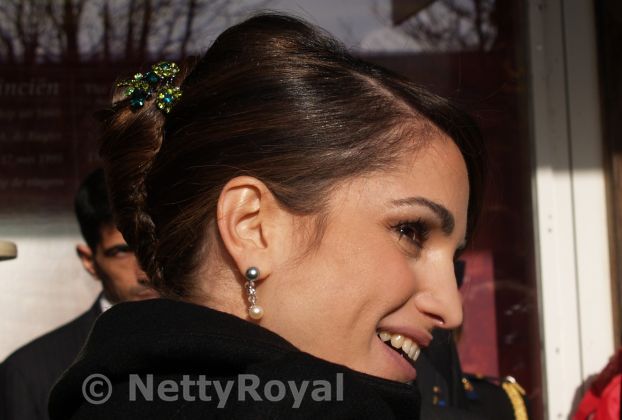 Was Rania’s statement necessary? As my fellow blogger Sophie from All Things Royal says Rania does have a point that we (the royalty watchers and fashion bloggers) can’t know exactly which clothes she has or which ones were borrowed or a gift. But it is a fact that the blog is quite clear about the way they are calculating the worth of the clothing and accessoires. Should a royal court actively attack a royal blog that has always tried to report fairly about any royal – as that is how it feels? No! As much as a newspaper or magazine is allowed to be critical, royalty watchers are allowed to express their opinion. UFO No More’s blog is the hard work of a group of fashion loving royalty watchers and their work is highly valued. They are NOT responsible for media taking over their information and make use of it in a negative and totally different way. And it is not that they have treated Rania differently from the other royal ladies in their list.

Now I am not a fashion expert, but I love to read blogs about it and admire their creators for their work. I do not expect royals to have spend all this money on new clothes and accessoires. As Josine of ModekoninginMaxima.nl and author of two books about the clothing of Queen Máxima says in her reaction she has chosen not to mention the prices of Máximas clothing in most cases.

“I have never done the sum of all the amounts and I will not. It remains a matter of guessing and guessing when we talk about the costs of Máxima’s clothing. Does she pay the full blow at Natan? How much does she pay to her hairdresser? Is the clothing really new or perhaps borrowed from a friend? Because I do not have the answers to these questions, I have always kept myself from adding up and I will always continue to do so.”

In some countries, like the UK, royals usually don’t seem to accept designer clothes for free and actually pay for what they wear, whether they pay the full price is a different story. In other monarchies, like Jordan, it is clearly more accepted to borrow clothing and jewelry from designers. This leads me to the question: is it acceptable for royals – like celebrities – to let themselves being used as a kind of advertisement for designers?

Sometimes – for example by Queen Mathilde of the Belgians and UK royals, to a lesser extend by Queen Letizia of Spain, Queen Máxima of the Netherlands and Crown Princess Mary of Denmark – royals deliberately wear designs from their own country to promote their country and to support the designers. While it is thus understandable that Queen Rania supports Jordanian and Arab designers, Sophie from All Things Royal has a point when she says: “she has an expensive and above all a very Western taste”. Where lots of royals like to wear affordable High Street labels like Zara, H&M, COS from time to time, you hardly seem to see her in anything else than luxury designer clothes in public, often not from (likely cheaper) Jordanian and Arab designers. Although she doesn’t make public which other designs she wears – nor do most royals from other monarchies by the way – it is often easy to find out when you have some knowledge.

It would only have been fair if Rania wouldn’t just have blamed the blog for the reports, but especially would have mentioned the media that should have read and interprete better. So why not attack them (too)? The blog might have given a false impression in her opinion, but they also clearly explain how they calculated their figures and don’t in any way say that the royals actually spent the sums that are being mentioned. It is just a pity that so many people and media can’t read and come to completely other conclusions reading the blog posts. Although it is an interesting read, a blog post like this should by no means being used by media or individuals to attack royals for their spending.

Addition 1 – Some people said the word attacking sounds  a bit strong, but that is how it felt to me (and no, I am not involved in the blog, just a long time follower) and I couldn’t find a word coming closer to what I meant.

Addition 2 – Queen Rania has every right to issue statements, but blaming one single blog is just unfair. She could have released a more general statement. To her defense, she seems to have taken the criticism about her “spending” habits in 2017 on fashion at least seriously, as some people on Twitter pointed out to me that she has worn more designer pieces from Jordan and the Middle East in the past year as she has done in previous years.

Addition 3 – Queen Rania has been criticized regularly for her spending in the past years, apparently even being accused of corruption in use of funds and reputation. It remains a touchy subject in Jordan and at countries that offer Jordan aid.

One thought on “Should Queen Rania have attacked a blog?”