Today the civil wedding of Prince Ernst August von Hannover Jr and Ekaterina Malysheva will take place in the New City Hall (Neues Rathaus) in Hannover, Germany. An impressive building I visited three years ago. It is a mighty building which rather looks like a castle as a city hall. The designer was Hermann Eggert, the first stone was laid on 30 June 1903. In the end it took 12 years to build and the costs were rather high, more than ten millions of German marks. For the opening on 20 June 1913 even Emperor Wilhelm II came to Hannover. The mayor of Hannover, Heinrich Tramm, told him: “It is all paid in cash, Your Majesty!”

In 1943, during World War II, the building was damaged during several bombings of the city centre, but by far not as bad as many other important buildings in the area. Also now, 104 years after it was finished, the city council holds its meetings here, the mayor of the city has his room on the first floor which overlooks the Maschpark next door, receptions and exhibitions are being held. The building is 129 metres broad, up to 76 metres deep and 97,73 metres high. The floor space nowadays is 8.700 square metres, of which 1.025 square metres are taken by the five assembly halls. Normally you can’t marry here, but for Prince Ernst August von Hannover and Ekaterina Malysheva an exception was made. They will be married by the present mayor, Stefan Schostok, himself.

When you enter the building you arrive in a huge entrance hall. In the hall are maquettes of Hannover in 1944, 1945 and today. It was absolutely shocking to see what had been left of Hannover after the bombings of 1945. 90% of the buildings in the city centre were destroyed and more than 6000 people lost their lives. When you go up to the third floor you find an elevator that takes you all the way to the gallery at the top of the dome – the elevator doesn’t go straight up, but follows the shape of the dome. From there you have a gorgeous look at the city, although unfortunately I didn’t have the best weather. 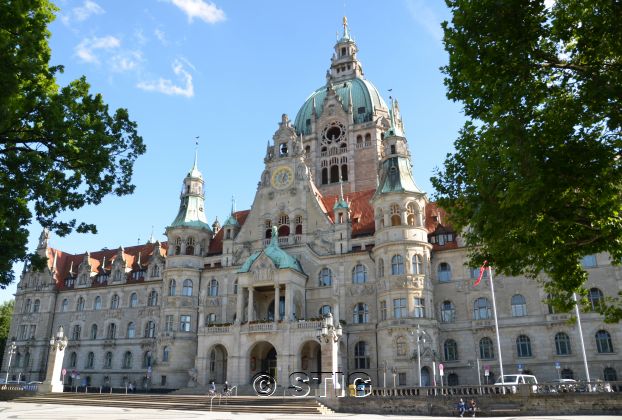 Royal Exhibitions at The Hague: Willem I and Máxima