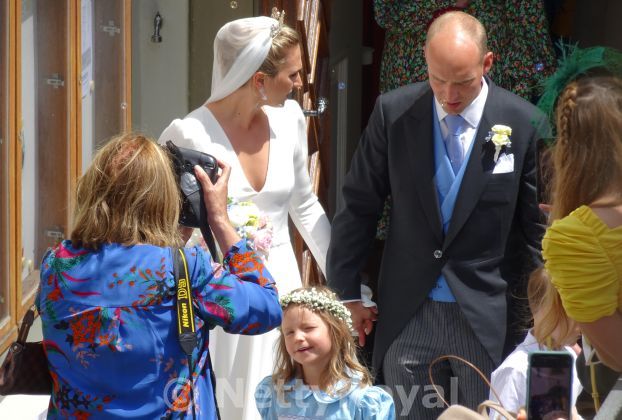 Finally after a long time there was a proper royal wedding again. At the Parish Church St. Johann in Sigmaringen Princess Flaminia von Hohenzollern married Károly Freiherr (Baron) von Stipsicz de Ternova on 26 June 2021. The wedding was originally planed for 4 July 2020, but was postponed (according to the local newspaper three times!) because of Covid-19. Instead they married civilly on that date in St. Anton am Arlberg, Austria, the same place where they got engaged on 28 December 2018.

The wedding dress was designed by Baroness Catarina von Lerchenfeld a friend of the bride, who also acted as one of the witnesses. The other witnesses were Baron Benedikt von Freyberg, Princess Antonia von Hohenzollern (sister of the bride), Count Zeno Piatti-Fünfkirchen, Friedrich Steinhart and Baroness Franziska Stipsicz de Ternova. The flower children were Count Leonhard and Countess Carla von Faber-Castell, Princess Emma of Prussia, Albert von Quistorp, Otto and Isabella Zhuber.

Because there are still Covid-19 restrictions the couple could invite 140 guests. Among them were Prince Georg Friedrich of Prussia, his wife Sophie, Count Clemens von Waldburg-Zeil-Hohenems and his wife Stephanie, Count Charles von Faber-Castell.

The catholic service was celebrated by the priest Markus Moser, together with the priest Ekkehard Baumgartner. The Kammerphilharmonie Bodensee-Oberschwaben led by Bruno Hamm and a group of soloists, including Countess Marie Gabrielle von und zu Arco-Zinneberg, took care of the music. After the wedding in the church there was a reception at Sigmaringen Castle, followed in the evening by a part at the home of the mother of the bride, Krauchenwies.

Unfortunately for people who wanted to have a look, the area around the church was closed off, something that happens more and more often. Only with lots of difficulties my friends could see something, while only one managed to take a few pictures, that were on request of the family only to be published after the local newspaper Schwäbische Zeitung and the magazine Bunte had posted their reports. The paper version of Bunte had a four-page report this week. See also Royal Musings. 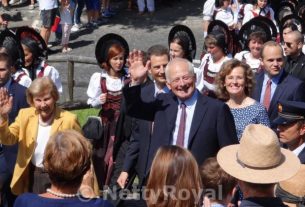 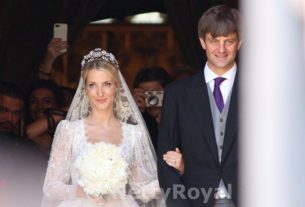