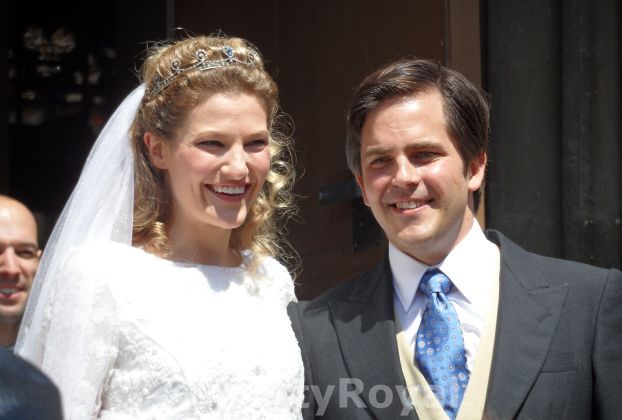 It was one of the bigger royal weddings of the year, the wedding of Prince François d’Orléans and Theresa von Einsiedel at the Basilika St. Jakob in Straubing, Germany, on Saturday, 26 July 2014.

The groom was born on 10 February 1982 in Madrid, Spain, as youngest of four children of Prince Michel of France, count of Evreux (born 1941) and his wife Béatrice Pasquier de Franclieu (born 1941). The bride was born at München, Germany, on 17 January 1984 as fifth child of Curt-Hildebrand von Einsiedel (born 1944) and Amélie Fürstin von Urach (born 1949), a descendant of the Kings of Württemberg.

Their engagement took place late 2013, and was reported in the Point de Vue of 7 January 2014. The couple met a few years ago via friends. The civil wedding took place at Sünching, Germany, on 25 July 2014. A flamenco party was held in the evening at Schönach Castle, Mötzing, Germany, the residence of the parents of the bride. The groom was given the title of Count of Dreux in the morning of his wedding day by his uncle the Count of Paris.

The bride arrived at the back of the basilica, her favourite church, almost unnoticed. She wore a gown of white silk designed by Brian Rennie for Basler, and among others embroidered with fleur-de-lys. The dress had a removable train and a lace jacket. The bride wore a tiara from her mother with a sapphire as the central stone. The bridal children were: Magdalene von Eichborn, Augustin Crépy, Eleonore Crépy, Almudena Dailly, Gaetano Dailly, Princess Isabelle d’Orléans. The altar servers were Gaspard Crépy and Diego Dailly. Witnesses were Viktoria von Einsiedel, Count Johann-Friedrich von der Schulenburg, Franziska Praxl, Prince Henry de Merode, Sol Medina Orléans-Bragança, Count Alexander Strassoldo.

The service was led by Pater Jaroslav von Lobkowicz LC and was held in four languages: Latin, German, English and French.

After the wedding the bridal couple left in a Volkswagen Beetle. They couple and their guests left for Schönach, where the party took place. They walked from the church there to the castle to give the locals the opportunity to see the couple. 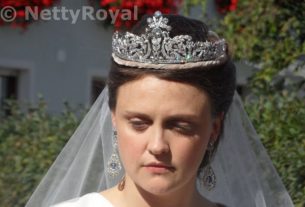 A sunny wedding in Bavaria with an impressive guestlist