Yesterday I finally went to see the exhibition “Grace Kelly-Princess and Style Icon” at Palace Het Loo in Apeldoorn, The Netherlands. Of course I had been outside when Reigning Prince Albert II of Monaco opened the exhibition on 3 June, but I wasn’t allowed inside.

Until 26 October 2014 this unique Grace Kelly exhibition is shown at Het Loo. The entrance fee for the exhibition is € 3,00, which comes on top of the entrance fee of the palace. Grace Kelly (1929-1982) was already a style icon when she was an actress, but when she married Reigning Prince Rainier III of Monaco in 1956 she became even more famous. She was one of the most photographed women in the 20th century, and lots of people were interested in her life and style. My own mother, born in 1944, remembers admiring the pictures, and still recalls the room for baby Princess Caroline in 1958, decorated in yellow, unheard of at the time. Princess Grace died when I was only collecting royal things for a few years, and it was all The Netherlands, Great Britain and Monaco in the magazines here back then. The car accident actually occured on my 9th birthday, and she died a day later, on 14 September 1982.

When entering the exhibition you first enter the life of Grace Kelly as a filmstar. Short clips of her films, dresses she wore at the time. I am ashamed to say I can’t remember ever having seen one of her films. The next room shows footage of her travel by boat to Monaco in 1956, her engagement and both the civil and religious marriage. More dresses, including ones worn at important moments in 1956, including the civil wedding outfit, the gown for the pre-wedding ball. And of course the wedding dress … unfortunately a copy, as the original, donated to the Philadelphia Museum of Art, was not in a good enough condition to be exhibited all over the world. Still gorgeous though! Also shown is the Renault Floride of Princess Grace – I wonder how they ever managed to get that inside – and more lovely dresses. Big photos on the walls throughout the whole exhibition too, as well as show-cases with some pictures and letters. 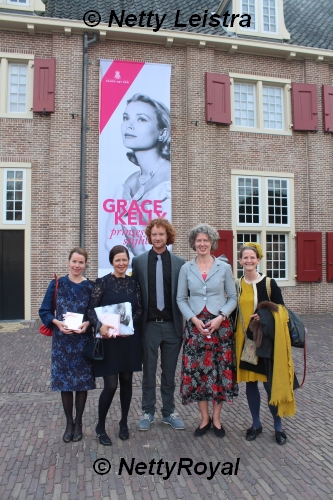 Upstairs more dresses including daily wear, (sun) glasses, hats and shoes. Sometimes even my friend Christine and I – both born in the 1970s – recognised dresses from known pictures: the purple dress she wore when meeting Diana Princess of Wales, her rainbow dress, a yellow dress from the year I was born, Chanel outfits, a blue flower-dress … Even two beautiful diademes, brooches, necklaces … Probably I should have read Trudie’s blog post better before going. She indicates that upstairs the arrangement of the exhibition is based on a geometrical palace garden, in which the show-cases with clothing are positioned as diamonds. The garden is symbol for the change of seasons and the circle of life. This structure for sure makes it possible to have a good look at all the items exhibited, and sometimes gives you a lovely view on items.

It took us at least one hour to visit the exhibition I think. Surely an exhibition that is worth a visit, if you have an interest in Grace Kelly/Princess Grace, fashion and jewelry. However better leave men who don’t like shopping outside. Just a pity that there are hardly souvenirs of the exhibition. I couldn’t even find postcards. You can either buy the book “Grace Kelly Style” written by H. Kristina Haugland (V&A Publishing) or buy boxes of exclusive chocolate from Monaco. Unfortunately these chocolates are quite expensive, and not meant for chocolate addicts like me who eat the few bonbons in the box within notime. The book however is wonderful for anyone who want to read more about the style of Grace Kelly. Lots of photos and outfits described in the book are shown at the exhibition.

One thought on “Grace Kelly in Apeldoorn”

A Street with a Royal Name

This is the Platinum Pudding 2022