Ha, ha, asked my uncle Wietse Leistra, who is a local historian, whether the royals had ever been in the area of Northwest Friesland, The Netherlands.

He came up with this picture from the royal train at Sexbierum, not too far from Tzummarum, on 27 September 1905. I searched and it turns out the railway between Stiens and Harlingen was opened in December 1902 (and closed in December 1940). It among others passed Sint Annaparochie and Tzummarum. An extensive newspaper report says that Queen Wilhelmina and Prince Hendrik of the Netherlands spent several days in the Province of Friesland at the time. On the 27th of September they apparently took the train from Leeuwarden to Stiens, and from there to Harlingen. They stopped for five minutes each on the railway stations of Stiens, Sint Annaparochie and Sexbierum where the inhabitants were celebrating them. Dutch flags all over the place as well as tasteful decorations. I wonder if the people really have seen much of the royal couple, but it must have been something very special at the time. 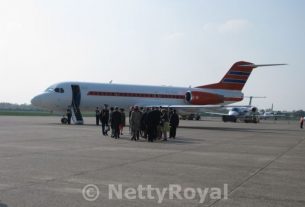 Looking back – Dutch photo session in the sun

2 thoughts on “A Royal Visit to Northwest Friesland in 1905”