Halloween, All Saint’s Day, just the right time for a spooky post. Often royal palaces and castles are old. There are many stories going around about ghosts haunting these buildings, sometimes friendly, sometimes they are not. A palace without a moat is like a palace without a ghost. This is of course just a very small selection. I must admit I have never seen a ghost myself, even not when visiting a palace or castle.

Zvíkov Castle This 13th century castle in the village of Zvíkovské Podhradí was probably built on the orders of King Premysl Otakar I of Bohemia. The Zvíkov Imp is mentioned in stories, Weird events are said to have occured here including technical problems, strange photos, and of course ghosts have been seen. It is supposed to be dangerous to sleep in the main tower, as who does so will die within a year.

Dragsholm Castle in Odsherred has no less than three ghosts, who once resided in the castle. They are a grey lady, a white lady and the 4th Earl of Bothwell, the third husband of Mary, Queen of Scots. He died at Dragsholm in 1578, having been chained to a pillar for the last ten years of his life. The seldomly seen grey lady might have been a woman who served in the castle. She only returns to see to it that all is well. The white lady is said to have died in the castle and might have been the daughter of one of the owners.

Even the Palace of Versailles near Paris is not free of ghosts. In August 1901 during daytime two British ladies reportedly met the ghost of Queen Marie-Antoinette at Versailles, as well as several people in late 18th-century costumes. Some even spoke to them.  They afterwards wrote a book about their experience. The chance however is big that they of course invented their story.

Frankenstein Castle near Darmstadt might have been Mary Shelleys inspiration for her novel Frankenstein. According to the TV-show Ghost Hunters International in 2008 there is significant paranormal activity in the castle. The ghost of a man called Arbogast is said to house in the chapel.

Neuschwanstein Castle of course has its own ghost, although only built in the 19th century. At night old men dressed in 17th century military uniforms float through the air, supposedly Bavarian generals who displeased their king.

Nordkirchen Castle was built in the early 18th century as residence for the Prince-Bishops of Münster. No human ghosts here. But it is reported sometimes one can see a ghostly horse and carriage storming through the gardens.

The house spirit of Schwerin Castle is called Petermännchen (little peterman). The 3 feet tall good spirit walks around in the castle with a dagger and lantern. He has a feathered hat, a moustache and lots of keys. He only leaves the secret tunnels below the castle when the place needs protection.

Don’t enter Wernigerode Castle at midnight on Christmas Eve, as you will be cursed. This person will be visited by the ghost of someone close to him/her who died the next day. And the ghost will gouge out your eyes.

John Brown, servant to Queen Victoria, often walks around in the corridors of Balmoral Castle. He usually wears his kilt.

On the anniversary of his death King Edward II of England still is being heard screaming at Berkeley Castle.

Bruce Castle in Tottenham, London, is famous for its ghostly lady. Constantia was the first wife of Henry Hare, 2nd Baron Coleraine. She died in 1680, who might have committed suicide because of the relationhip between her husband and his former fiancée Sarah Alston, wife of the 4th Duke of Somerset. They eventually married after Constantias death. She has been haunting the castle since 1858, but hasn’t been seen for quite a while.

Buckingham Palace has its own ghosts. There is an enchained monk in a brown cowl. Another ghost is Major John Gwynne, the private secretary of King Edward VII, who shot himself after his divorce.

Edinburgh Castle is one of the most haunted places in Scotland. A phantom piper, a headless drummer, spirits of French prisoners and colonial prisoners and even the ghost of a dog are wandering around.

The Scottish Glamis Castle has a white lady, who is thought to be Janet Douglas, Lady Glamis. There is one seat reserved for her in the chapel, and still now nobody is allwed to sit there. Another known ghost is Macbeth.

Hampton Court Palace has many ghosts. The Haunted Gallery is often being visited by Catherine Howard, the fifth wife of King Henry VIII of England. Both guests and staff have heard her screaming. The third wife, Jane Seymour likes to walk around in the Silver Stick Gallery. The grey lady of Hampton Court is Sybil Penn, a servant to the Tudor monarchs and a nurse to Queen Elizabeth I and her half-brother Edward. She died of small pox. She only started to appear after her tomb was moved in 1829. Another ghost is called Skeletor, although many believe he is actually King Henry VIII himself.

Hever Castle of course has the ghost of Anne Boleyn, the second wife of King Henry VIII, who especially likes to walk around on Christmas Eve. There is also an unhappy ghost and a phantom horse in the castle.

Kensington Palace in London hosts the ghost of Princess Sophia, one of the daughters of King George III. She never married and spent the last years of her life at the palace, blind and lonely.

Henry VIIIs first wife Catherine of Aragon haunts Kimbolton Castle, where she spent the last years of her life.

The Palace of Holyroodhouse in Edinburgh does have its ghosts. Bald Agnes, Agnes Sampson, who was tortured in 1592 after having been accused of witchcraft is said to still walk around, naked. Also Lord Darnley, husband of Mary Queen of Scots haunts his old rooms in the palace.

The most active ghost of the Stirling Castle is the Highland ghost, dressed in full traditional costume. Visitors have mistaken him for a tour guide several times, but then he just vanishes. The green lady is said to have been a servant to Mary Queen of Scots. She saved the life of her Queen when her bed curtains were set alight, but died herself. Some say Mary herself also haunts the castle as pink lady.

Anne Boleyn, with her head under the arm has also been seen around the White Tower of the Tower of London. Reportedly also King Henry VI, Lady Jane Grey, Margaret Pole and the Princes in the Tower were seen. Arabella Stuart, a cousin of King James I, especially haunts the Queen’s House, where she was imprisoned and died.

King Henry VIII has haunted the Dean’s cloisters at Windsor Castle. Queen Elizabeth I has been seen in the library. And also King George III of Great Britain was often seen standing at the windows of the library or in the doorway. Queen Victoria is another ghost that is said to walk around at Windsor. Princess Margaret once did see Elizabeth I’s ghost, King George VI has also seen her at the beginning of World War II and even Queen Elizabeth II is said to have seen her namesake. In Windsor Great Park iss the ghost of Herne, a huntsman of King Richard III of England. In case you see him, that means misfortune. 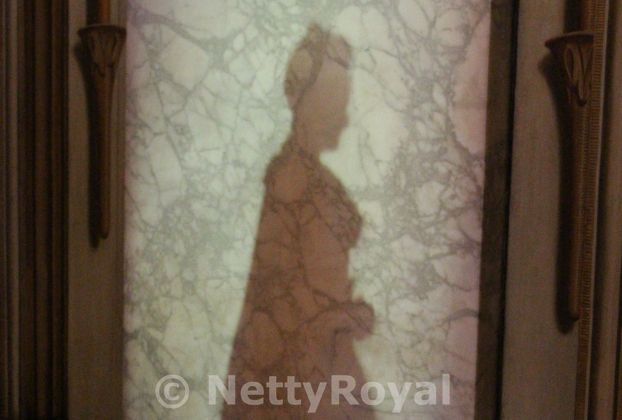 Charleville Castle in Tullamore has its ghosts. One of them is a little girl called Harriet, the youngest daughter of the third Earl of Charleville. She died on 8 April 1861 after falling down the staircase. When climbing the stairs visitors can still feel her presence and some people say they have seen her ghost or have heard her singing, laughing and screaming during the night.

The 800-year old Malahide Castle has at least five ghosts. One is Sir Walter Hussey, son of the Baron of Galtrim, who was killed in battle in the 15th century, on his wedding day. After his death his bride-to-be married his rival. Another ghost is Lady Maud Plunkett who appears on her wedding day and chases her husband’s ghost. The poor jester Puck fell in love with Lady Elenora Fitzgerald. He was stabbed to death and since haunts the castle. Also here there is a white lady. The last ghost is that of Miles Corbett, who was hanged in the times of Oliver Cromwell. His ghost appears as a whole soldier in armour and then falls into pieces.

The 12th-century Akershus Fortress, where several Norwegian royals have been buried, is one of the most haunted places in Norway. Not surprising as the place has a long history. There is a demon dog called Malcanisen guarding the gates. When he approaches you, you will likely die a horrible death within three months. A woman called Mantelgeisten is seen rather often walking to her room.

Przemysl Castle (Royal Castle) in Poznan is the place where a White Lady called Ludgarda still walks around in the chambers and on the walls. Under the walls the Black Knight can be seen who mourns her death. This 13th century duchess was apparently murdered by servants, probably asked to do so by her husband.

Wawel Castle in Warsaw used to have a dragon’s cave. The dragon luckily was caught and his bones can be seen. Here the Polish kings were buried, and their ghosts still inhabit the castle. They are said to gather every Christmas Eve, including the court jester of King Sigismund.

The Palace of Linares in Madrid was built in 1873 by José de Murga, the Marquis of Linares. He had married the daughter of a tobacconist. Only when his father was dying he found out he had actually married his half-sister. To forget the shame he had the palace built. Unfortunately the couple already had a daughter, who was taken to an orphanage. She now haunts the palace sometimes, crying because she doesn’t have a mother.

When you don’t believe in ghosts, well some royals do. In an interview on Swedish TV early 2017 Queen Silvia of Sweden said she shares the 17th-century Drottningholm Palace with small friends … ghosts. She thought it to be rather exciting than scary. They’re all very friendly, the Queen says. Also Princess Christina, Mrs Magnuson said that there is a lot of energy in the house.

Also the Royal Palace in Stockholm has several ghosts. The Grey Man can be found in the northern corridors since the 13th century. The white lady only shows herself when someone at the castle is about to die. She is supposed to be Agnes of Orlamünde, a German noble lady from the 13th century. King Carl XVI Gustaf of Sweden, according to the author Herman Lindqvist, has once said: “Personally I haven’t seen the White Lady, but I have, as so many others here at the castle, fell strange things.”

Come to the palace grounds of the ‘Iolani Palace in Hawaii around 5.30am and you might see the ghost of Queen Lili’uokalani, at least according to the security guards.

Icons from the National Portrait Gallery