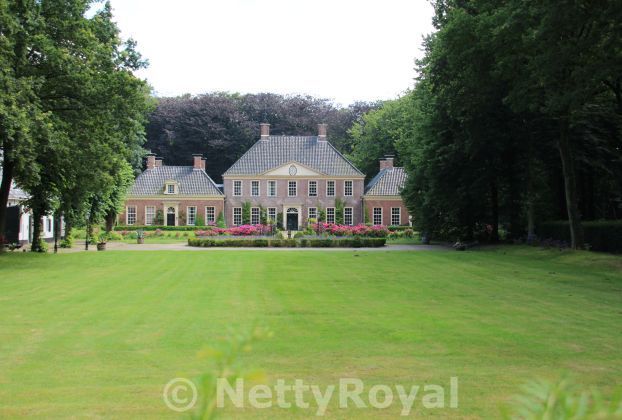 This summer I visited friends. As my friend has a lego exhibition at the Brink Hotel right now, I of course had to see it. After our visit we walked through the village, or rather around Laarwoud. Surrounded by trees this (former) noble manor – in the province of Drenthe they call it a havezate – nowadays is hardly visible, but we managed to see something. Afterwards we visited the nearby church and the cemetery outside the village.

Probably the foundation for the estate was already laid in the Middle Ages. The middle part of the present house however dates from 1688. In that century the Van Selbach family owned Laarwoud. In 1750 it was bought by Alexander Carel van Heiden (1709-1776), “landdrost” (a kind of steward) of Drenthe, and chamberlain of Stadtholder Willem IV. On 5 March 1751 he received the permission to transfer the right of manor house from his manor house Vledderinge in Meppel to the Laarwoud and had the two wings built. The family belonged to the German nobility and Alexander, married to Esther Susanne Marie de Jassaud was allowed to call himself a Baron.

His son Sigismund Pierre Alexander (1740-1806), married to Maria Frederica van Reede, even was able to use the title of Count van Heiden (of the Holy Roman Empire), and was lord of Laarwoudt, Entingen and Reinestein. He added Reinestein to his surname. He however died in Zuidlaren and in the church near Laarwoud the grave of him and his wife can still be found. Under Stadtholder Willem V he was a chief chamberlain, and also chamberlain of the Princess of Orange-Nassau.

His second son Lodewijk “Louis” (1772-1850) was a Dutch admiral and naval hero. When the French conquered the Netherlands he had fled the country with Stadtholder Willem V to England. Upon his return he was captured. As soon as he was released he offered his services to the Russian Emperor. He married and settled in Estonia, where he died and was buried. His descendants Van Heiden and Von Heyden remained in Russia. Sigismund Pierre Alexander’s second son was Sigismund Jacques (1771-1830), who did live at Laarwoud. His son Count Louis van Heiden-Reinestein was governor of the province Groningen and also member of the Dutch House of Representatives. He remained unmarried and with him the family in the Netherlands became extinct. The estate was inherited by the descendants of Louis’ sister Marie Frédérique Isabelle, who had married Jonkheer Paul Antoine Guillaume de Milly.

The family Van Heiden, and after they became extinct the Jonkheren de Milly van der Heiden-Reinestein, until the 20th century played an important role in the politics in the province of Drenthe. The family sold the house to the municipality of Zuidlaren in 1915. Afterwards, until 1941, the mayors lived in the house. In that year the German troops took over. After the Germans left in 1945 the place for a few months became an emergency nursing home. The Germans however had destroyed the lay out and interior of the building and the municipality didn’t have the money to restore the house.

In the end it ended up becoming the municipality hall, the discussions about that and the renovation however continued until 1953. A new municipality hall was built after a municipal reorganization in 1998, and therefore the Laarwoud was abandoned in May 2004. The house was sold to the Wagenborg family, that still live in the house. Unfortunately that also means that the house can’t be visited. The carriage house seems to be rented out to companies.

Near the entrance is a lovely church where one can see some old graves and other historical features. The graves of the last members of the Van Heiden family are at the cemetery, although you will have to search for it. Unfortunately the surrounding fence is not looking good and some stones are broken. Really a pity that the municipality of Tynaarlo or the village of Zuidlaren doesn’t seem to restore it. 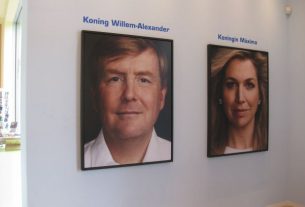 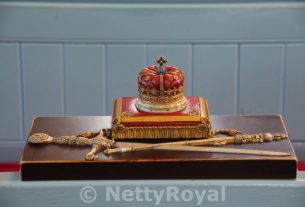