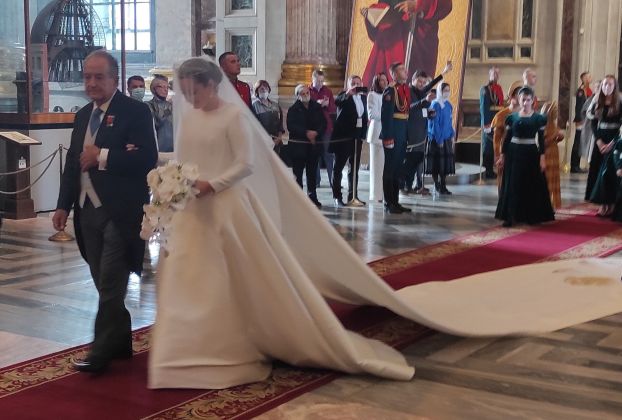 As there was an overload on information and photos I decided to make a separate post after all. Photos of the wedding itself were provided by my longtime Russian internet friend Dimitry, who was so lucky to be invited to the wedding. Photos are taken with his handy. I would have loved to go myself, but I didn’t dare to book flights to St. Petersburg this summer.

For a pre-wedding report with lots of details, also about the wedding dresses, rings and tiara, have a look here. If you want to know more about the couple see here.

Schedule of the wedding festivities

The mother of the groom arrived in St. Petersburg on 29 September 2021. The bride spent the last night at the Hotel Astoria in St Petersburg. The bride mentions on her Instagram that journalists climbed the roof of the hotel last night to take pictures of the couple. The police had to intervene.

The Russian Orthodox service only lasted for one hour, and thanks to a friend of mine we found a link to watch the wedding live online in time. Metropolitan Barsanuphius of Saint Petersburg and Ladoga presided over the wedding. The rings seem to have been exchanged already at the start of the ceremony. The crowns were held above the head of the bride and groom. The witnesses for the groom were Crown Prince Boris of Bulgaria, Crown Prince Leka of the Albanians, Prince David Bagration-Mukhransky and Prince Joachim Murat. The bride and groom walked several times through the cathedral.

The guests had to stand most of the time, the Duke of Bragança at one point seems to have fainted, but was back on his place later on. At times the situation seemed to be a bit chaotic as people walked and moved around, but I was told that is quite normal at a Russian Orthodox service. The Russian guests by the way were separated from the foreign ones, as seems to be the custom in Russia. The mother and aunt of the groom and parents of the bride were seated seperately. All guests were tested and the ones who wanted to wear a mask, could do so.

After the wedding the bride and groom posed at the steps of the cathedral, before driving off in a car under loud cheers. In the meantime most guests stayed in the cathedral and amused themselves with talking and taking photos of each other. The newly wed couple headed to the Cathedral of St Peter and St Paul in St Petersburg. The bride laid her bridal bouquet on the Romanov tombs there, which was an emotional moment for the couple, and they also visited the tomb of Peter the Great of Russia.

The official wedding photo shooting took place before the wedding in Tsarkoe Selo it seems. I expect a huge report in the French magazine Paris Match.

The wedding cake for the evening gala was created by Michael Lewis-Anderson in collaboration with Fabergé. The huge piece of cake was named the Victoria Romanovna cake after the bride of course. The cake was made with almond Dutchess biscuit, crème madam, vanilla and orange flower water, raspberry coulis, Russian buttercream with fresh raspberry. And filled with Russian blueberries. No sugar was added to the creams. The cake was coated with the finest icing from Smartflex . All cakes for the 500 guests were made in the strictest of hygiene control in the Astoria hotel Pastry department, Michael Lewis-Anderson told at his website.

On October 1st, the Hierarchs of the Russian Orthodox Church Outside of Russia sent a congratulatory testament, or “gramota” to HIH Grand Duke George, and to HSH Princess Victoria Romanovna.

Around 1,500 guests were expected to attend the wedding. For security reasons the list was kept private. 300 Guests were said to attend the reception on Thursday, but no more than 100 at the same time, due to Covid-19. About 550 guests attended the gala dinner, while 700 guests were expected to attend the brunch. The father of the groom Prince Franz Wilhelm of Prussia couldn’t attend on advice of his doctors due to a serious health condition which began only days before the ceremony. Russia is currently closed to foreigners without special permission of the Government via the Department of Foreign Affairs. This permission was of course granted to a number of foreign guests for the wedding. 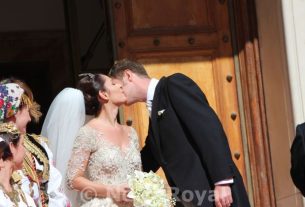 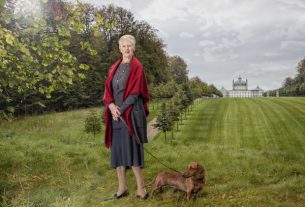