NettyRoyal
1 Comment on Royal Lego in Windsor and London (4)

Once again I went on vacation with my friends Erik and Mirjam. We stayed in London during the first five days of May 2017. Of course we were keen on seeing Legoland in Windsor too, after having visited Legoland Billund in Denmark last year. Tuesday May 2nd turned out to be the best day of the week anyway, so we were lucky. We saw a few royal things, tried out a few attractions. Honestly Billund’s Legoland is much better and bigger than Windsor, apart from a few British royal lego buildings (unfortunately not as much as in Denmark). The people working in Windsor Legoland are however very friendly.

It was an amazing and unexpected experience. Erik had taken the three lego-dolls that are supposed to be the three of us (I am the one with the camera) with him to the UK. We were admiring London in lego when Erik decided to ask a man working at the park whether our three dolls could be placed at Buckingham Palace. Surprisingly no problem. So at first they were standing in front of the Victoria Memorial in front of Buckingham Palace, almost there where we had been the previous day. And guess, I was allowed to stand on what in reality is The Mall …. between all this lego. And even the busses were stopped for me.

Better even, the three little dolls were then being placed on the balcony of the Buckingham Palace. Amazing really … here you see “us” there, being royal for a few minutes and get our moment of fame, cheered by the small audience in front of the gates and some curious people passing. 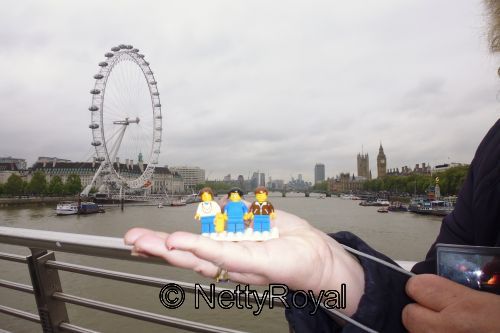 The next day a British friend and I toured the countryside, while my legoversion stayed in London and admired the great views around the Thames. Unfortunately a day with lots of rain, but it could have been worse.

One thought on “Royal Lego in Windsor and London (4)”

The Ancestral Castle of the Counts van den Bergh